Home Uncategorized The Top Chef 10: What We Learned from Last Night’s Episode 4 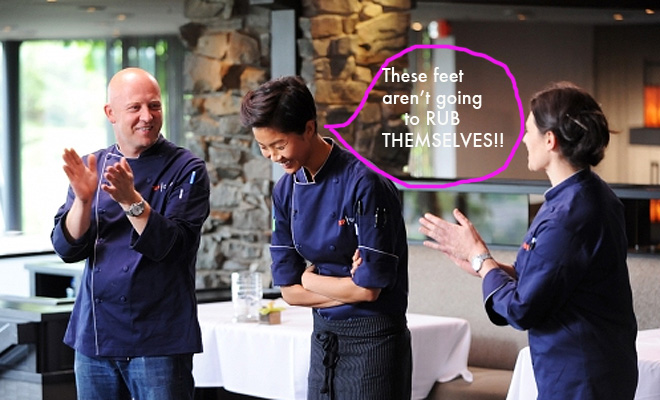 We skipped last week’s Top Chef Seattle on account of our being neck-deep in stuffing (we’re still eating it), but spoiler alert: we lost our hometown gal Kuniko. We miss her ’tude and effortless Japanese cooking chops already (not as much as John, though). We may yet see her again, however, because…

9. …Last Chance Kitchen is back (video below!)

The teasers clued us in that Last Chance Kitchen, last year’s online-only competition that pit eliminated contestants against each other for a chance to come back to the show, has returned. Honestly, we never watched it the first time, but we know now that nobody’s gone for good. Even Carla (though she probably is…)

8. Kristen is kind of a floozy

“Can I get a foot massage?”  I mean, really. Every girl watching promptly made a mock-jabbing motion with their pointer fingers down their own throats, are we right? Girl can cook though. Mushrooms, anyway. And onions…

Did you guys note the hard core thrashing synthesized guitar riffs that took over during the butchering scenes? That’s the most rock we’ve heard on Top Chef since the King Ad-Rock starred on Just Desserts. Bitchin’.

“I can’t do anything right…” said the Denver Broncos’ #1 fan, followed by a Level 9 frowny face. Somebody cue Vince Guaraldi.

5. Chrissy is a contestant

Are we the only ones who never noticed this girl before now? That was fast.

Tom was not a fan of CJ’s retro lamb dish, criticizing, among other things, his “wet pilaf.” The second it came out of his mouth we went ahead and booked the domain. (Not really. But somebody should.)

During what we like to call the “goofy interruption” segment, there’s a lot of talk about the size of Josie’s potatoes. But nobody looks quite as elated as Padma to see the giant spuds set before her. Kinky.

It’s decided. (Though he acts more like the toddler-version.)

We’d heard of Rocky Mountain Oysters, but this Oklahoma colloquial term for a bull’s balls was a new one for us. Thanks for the heads up Josh!

‘Till next week. Now, here’s the premier of this season’s Last Chance Kitchen: