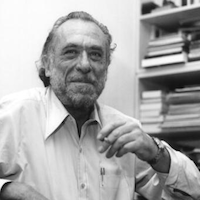 We can’t presume to know what poet, novelist, and writer Charles Bukowski would think of the now soft-open Santa Monica-based bar, Barkwoski. As long as the bartenders kept him supplied with free booze he might’ve liked the idea of drinking under large, black-and-white portraits of himself. But that doesn’t mean we have to. From minor to whole-hearted, we rank our objections:

5. There’s already a Bukowski bar, the one that he actually drank at. It’s called King Eddy Saloon and it’s downtown, but even that has been gussied up to make it more palatable to newer residents of the rapidly gentrifying neighborhood.

4. It’s in Santa Monica. Which makes no sense.

1. Nothing. In a world where people keep pulling the lever on Sex Pistols-themed slot machines while wearing Che Guevara T-shirts, why should we raise an eyebrow at a watering hole that’s hell-bent on sanitizing Bukowski’s dirty, not-so-pretty legacy and selling it back to consumers at inflated prices? Caveat emptor.

What’s next from the Barkowski owners: A Raymond Chandler speakeasy? An Ernest Hemingway hunting lodge? A Hunter S. Thompson ride at Disneyland? The sky’s the limit!

*For the record, a dive bar “with a little class and without the filth” is by definition not a dive bar.