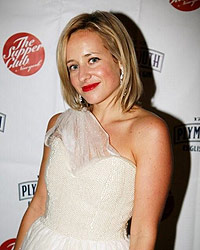 Over lunch at Bloom Café on Pico Blvd., Lonsdale explained the concept, which is something like Skull and Bones as imagined by Vogue: a mash-up of beautiful people hand-picked by her convene for intimate events (mostly dinners) three or four times a month at first-rate venues to exchange bon mots and business cards. Lonsdale—an eccentric gap-toothed blonde former stylist in Aviators and feather earrings—only relocated to L.A. last month, but has already staged dinners at the Mondrian, Chateau Marmont, Sunset Tower and Shangri-La hotels, and plans are in the works for more unexpected events, like a Malibu picnic and a black tie party at Pink’s Hot Dogs.

We’d call it exclusive, but that would be the understatement of the century: applicants must be referred by two current members, then pass muster with Lonsdale herself. (Yes, there’s an interview, and only a fraction of those who apply actually get in.) Only then can they shell out $2,000 a year to mingle with her rotating guest list of movers and shakers at an unlimited number of events. “For me, it’s about sitting next to someone and not even knowing what they do,” says Lonsdale. In a town where  “what can you do for me?” is a constant, if unspoken, refrain, that philosophy is strangely refreshing, though it’s hard to imagine how it would apply to Natasha Henstridge and Lulu De Kwiatkowski—two guests at recent L.A. dinners.