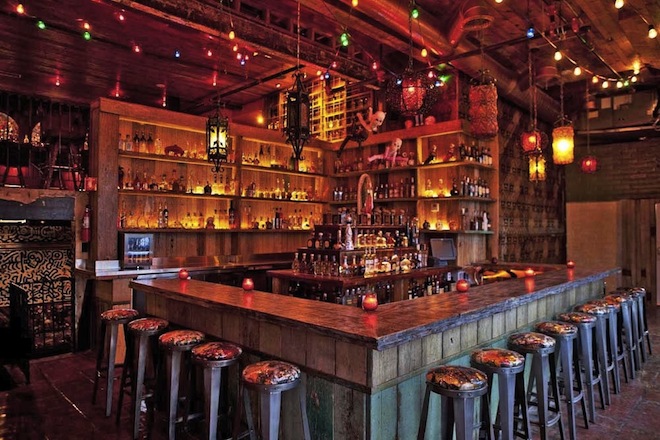 Cruise down the Sunset Strip today and you’ll see that the storied temples of rock are now fighting for business with flashy shrines to guac. During the last five years, the Strip’s half-dozen tourist-trap Mexican restaurants have upgraded their decor from Margaritaville to Vegas slick. While the cuisine is far from authentic—gloppy combo plates, yellow cheese, and anything with mahimahi—it is a legitimate celebration of pocho (Americanized Mexican) and gringo (Mexicanized American) cooking. If there was ever a time to extol the virtues of assimilated Mexican flavors, it’s Cinco de Mayo, which hits us next Sunday. The fete, honoring the 1862 Pueblan victory over the French, is really more of an American holiday. Ditch the sombrero for a West Hollywood getup (those pleather pants aren’t going to wear themselves), and hit these bueno Strip stops on Jose Cuervo’s big night.

A visit to Cabo Cantina is like a trip to Cabo—the airport, at least. Flip-flops, body shots, nachos, and T-shirts reading “One Tequila, Two Tequila, Three Tequila, Floor” abound. Let’s face it—it’s Cinco de Mayo here every day. After you’ve exhausted the fresh guacamole and chips, there are fajitas (steak, chicken, and shrimp) brought sizzling to the table.

The New York chain Rosa Mexicano (New York City?!) feels as much like a club as a restaurant—it even has a tableside guacamole show. The pescado pibil, or marinated fish, is inspired by Baja; other dishes feature regional flavors with a dollop of gringo. Pochos will dig the crispy flautas.

Owned by Harry Morton, restaurateur Arnie’s grandson, Pink Taco is the bad boy of the Strip. Its namesake is the panucho, a Yucatán-style taco whose name sounds like another, NC-17 Spanish word (use your imagination). The tequila list is admirable—around 60 selections—and the flat, top-seared carne asada is straight-up East L.A.