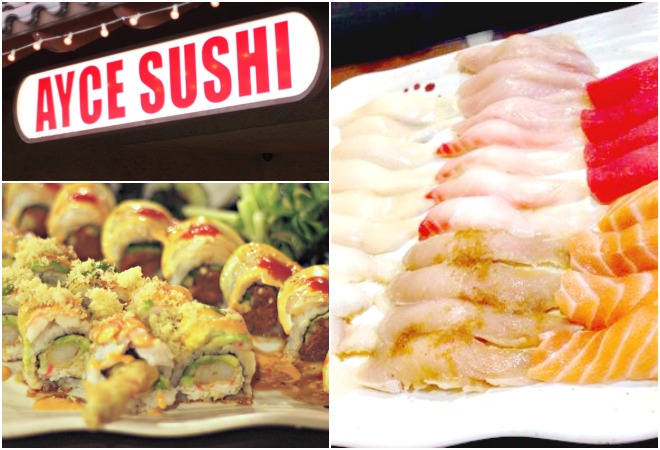 The vast expanse of the San Gabriel Valley is a hotbed of restaurant trends.

This won’t come as a surprise to anyone who has driven past the umpteenth hot pot restaurant along Valley Boulevard, or spotted one of many Cajun-Vietnamese by-the-pound seafood restaurants with names like “Stinkin’ Crawfish” or “Fiery Crab.” Don’t even get us started on shaved snow and boba.

Some SGV trends, like the rise of regional Sichuan cuisine, offer cultural insight into a demographic that is growing in both size and influence. Others are simply about good, cheap food at low prices. Really though, it’s the substantial population of Asian Millennials in the SGV that act as the true trendsetters: Like most young people, they love to eat out and have fun, while also not breaking their budget.

It makes sense then, that one trend in particular is exploding at a staggering rate. I’m talking about the holy grail of bargain eats: All-You-Can-Eat Sushi.

Of course, neither the concept of gluttony nor the all-you-can-eat sushi buffet is exactly new in L.A.—places like Midori, a higher-priced chain in the San Fernando Valley, have been been around for more than a decade. But rarely has this concept taken hold like it has in the Eastern SGV over the past few years.

For example, at AYCE Sushi in West Covina, $25 ($23 with a student ID) will score you unlimited rounds of Japanese appetizers, sushi rolls (over 50 choices), nigiri sushi (over 20 choices) during dinner. At lunch, it’s only $20. That is, if you can manage to get a table. Since there is no time limit—except for closing hours—it’s not uncommon to see diners lingering for hours at a time, seeing if they have enough stomach space for one more spider roll or plate of gyoza. On a standard weekday night, the wait for a table stretched from 45 minutes to an hour, as groups of kids in college sweatshirts loitered in the parking lot puffing on those ridiculous vapor hookah things.

Still, that’s a relatively low investment for the opportunity to be rolled out of the place like Violet Beauregarde in Willy Wonka & the Chocolate Factory after consuming half your body weight in shrimp tempura and spicy tuna.

Is the sushi any good? If you have you a taste for quality sushi then, no, of course not. It’s a notch worse than the conveyor belt variety, if that provides any comparison. The tuna, likely dyed red, is dried out. The salmon, likely dyed orange, is a bit better. The ikura (salmon eggs) taste like too salty boba and the uni resembles melted ice cream. I don’t recommend the surf clam.

But for many of the customers gorging on all-you-can-eat-sushi—many of them students at Mt. San Antonio College, Cal Poly Pomona, or UC Riverside—the low price is the main attraction. And for the most part, the sushi isn’t terrible (especially those rolls smothered in spicy mayo, avocado, and tempura flakes). The food is all made to order, which is more than many lower-tier Asian buffets can claim.

The second question, then: How does a business like this remain profitable? That answer is less clear. Obviously, the lower cost is the result of using less-than-premium cuts of fish, as well as opting for imitation crab and other fillers. The high volume of diners helps too. But still, in a world where fresh fish is a rapidly dwindling resource, can AYCE Sushi really be financially sustainable (nevermind environmentally sustainable)?

It’s a bit too early to tell. Most of these sushi bars started appearing in the early 2010’s, opened by Korean restauranteurs who tapped into a demand for cheap sushi. Now you’ll find no shortage of locations charging $25: Crazy Mike’s in West Covina, Sushi One Spot in Rancho Cucamonga, Hon Sushi in Monrovia, Sushi Snow in San Dimas, Sake Roll in Glendora, Sushi Fire in Duarte, and Sushi Asahi in Riverside—just to name a few.

As with many AYCE BBQ restaurants in Koreatown, a large segment of unlimited food economics depends on upsells like alcohol. During my visit to AYCE, it didn’t appear that many tables were drinking, instead they doubled down efforts on plates of oysters, uni, and scallops. But even then, a pint of Sapporo costs $2.50. That deal alone is impressive.

After eating way too much during my dinner at AYCE, unsurprisingly, I probably don’t plan on visiting again soon. But it’s clear that I am but an amateur. With these unlimited sushi restaurants serving packed houses every night, there is a clear demand for this type of restaurant, regardless of whether it is a profitable business or not. Los Angeles is known as one of the best places in the country to eat an array of high-end sushi, but it also might dominate the other end of the spectrum as well.

If you do end decide to check your self-respect at the door and end up at an all-you-can-eat sushi restaurant (kidding!), here are five tips culled from seasoned veterans:

Check Yelp
Trusting Yelp reviews is usually ill-advised, but in the case of all-you-eat-sushi places there seems to a subculture of users who are experts in this particular field. If a review begins “I’ve eaten at all the other AYCE sushi places in the SGV,” then take heed. Remarks on bad service should be overlooked though (what do you expect from those poor waitresses?). The quality by most beloved by Yelpers, aside from fresh-ish seafood, is a low fish-to-rice ratio—more on that below.

The Less Rice, The Better
Rolls—especially hand rolls—are for suckers. AYCE sushi pros stick mostly to nigiri, preferably with a tiny dime-sized amount of rice glued to the bottom (often found at the sushi joints with highest Yelp rating). Of course, if you really love those rolls, most offer soy paper “no rice” versions.

Keep it Raw
Another way to “win the buffet game,”, borrowing a phrase for Midtown Lunch’s Zach Brooks, is to load up on high-dollar items like oysters with ponzu, fresh uni, and soft shell crab. Most place will have a per-person limit on how many servings of these you items you can order, so make sure to push it to the max. Note: edamame, miso soup, salad, and chicken teriyaki are also for suckers. Avoid!

Pace Yourself
This should go without saying at any buffet, but especially at sushi: slow and steady wins the race. Your server will hand you a paper menu and pencil, so it’s easy to hurriedly check all the boxes like you’re a confused voter circa 2000. Take it easy! Even the spots with time limits will allot you two hours. Stagger your ordering into multiple rounds so as to avoid a bunch of leftovers that you’ll be charged for at the end.

Save Room for Ice Cream
Once you’ve filled yourself to the brim with sticky rice and seafood, ask for green tea ice cream. It’s thede rigueur dessert at these places. Does it taste like green tea? Not really, but it’s green, cold, and creamy.