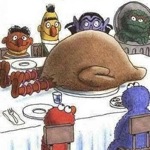 As you undoubtedly know by now, Thanksgiving is but a few days away. And yes, we’re supposed to reflect on what we’re thankful for. And while this can certainly be construed as a rant, I’m going to instead pretend that it’s me being thankful for all of you not committing these mortal sins. And even if you are, I hope you have a great holiday anyway!

Overcooking the Big Bird
Doing the math in your head using the conventional recommended 18 to 22 minutes per pound formula, you’re probably torching that bird for a few hours too many, rendering it drier than Mitch Hedberg’s stand-up routine. Alton Brown’s method of roasting at 500°F for 30 minutes before turning down the heat to 350°F until the breast meat reaches 161°F—about 2 to 2 1/2 hours for a 14- to 16-pound bird—is still the best in my mind.

Leaving it to Vons
Now you’ve done it; you’ve given up completely. Why cook when you can get an assembly line meal ready to go? True that there is still a little unavoidable labor, but stirring the gravy full of modified starch, microwaving the mashed rehydrated potato flakes, and completely drying out reheating your bird in the oven isn’t such a taxing chore, right?

I’m going to assume if you went this route, it was either because of convenience (read: laziness) or time/money constraints. If it’s the former, get over it and rally next year; it’s a holiday and it’s supposed to be special, damn it. Make it so. If it’s the latter, take the potluck route in the future. Everyone invited should be glad to bring a dish. And if they’re not, they shouldn’t be invited.

Subbing Tofurky and Other Faux Fowl
As proud as I am to be a vegetarian, fake turkeys just aren’t my thing. While our veggie blogger friends The Hot Knives set out to prove that a soy turkey can indeed be delicious, I personally would much rather just have a giant plate of vegetables and sides, maybe with some roasted butternut squash risotto. I’ll thank you to keep the strangely shaped soy and/or wheat gluten blob off of my Thanksgiving table.

Doing Thanksgiving at Denny’s
Five years ago (before becoming a vegetarian), I somehow ended up at a Denny’s for Thanksgiving dinner. After all, you never plan to go to Denny’s, you do just end up there. Even still, I’m not sure what was more depressing: the pallid, flavorless food, or learning that the waitress was missing her own family’s celebration to be here, at Denny’s, serving the aforementioned slop to me.

Cooking Turkey in a Bag
I winced in horror years ago when Nana Nancy, in all her culinary wizardry, pulled her turkey out of the oven, all sealed up in one of those nasty oven bags. True that despite her enormous efforts to overcook it by several hours, the bag did keep this bird moist. Still, something about it was immensely off-putting, and while it certainly could’ve been the power of suggestion, I swear it took on a plastic-y taste. In my mind, when the zombie apocalypse happens—and it WILL if you cook crap like this—Zombie Julia Child will break out of her grave and come straight after your ass. Some studies have found that chemicals do leach out from the bags at high temp, but kudos to Grist for presenting a much more balanced take on the issue than I do.

Frozen Butterball Turkey
I must tip my hat to you if you cared enough to opt for a turkey, like those from Lindy & Grundy, that’s cage-free and humanely treated during its few short months on this earth. It costs extra, but I appreciate that you appreciate those values. If you instead got “rewarded” with a free frozen turkey from the big box store for spending x amount of dollars with your “reward” card, just know that its existence had little in common with the birds those pilgrims cooked up. And recent video released by the animal rights group Mercy For Animals allegedly documents scenes of abuse by Butterball farm workers.  We’re not saying everyone should schill out hundreds of dollars for pampered poultry, but we encourage everyone to be more conscious of how their food gets to their plate, in general.

Thanksgiving Cooking Lessons from Guy Fieri
Whatever you do: never, ever, EVER, listen to Guy Fieri. Please AND thank you.