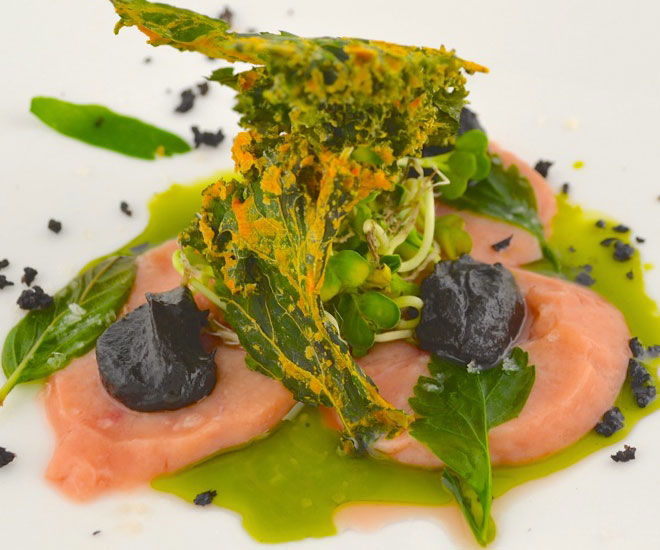 In L.A., bison meat pops up here and there, most often ground in the form of a burger, like at the Counter or at West Hollywood’s Burger Lounge. You’re almost guaranteed to spot a bison in link form at Wurstküche, the exotic sausage restaurant, though it’s blended with beef and pork, and they call it buffalo instead of bison. Old school.

So, aside from the inherent cool factor that comes from eating something giant with horns, what’s the appeal? Bison meat is very lean (good!), but can be on the dry side when cooked (bad). So, even though it’s a healthful choice as far as reddish meat is concerned, it needs extra love, and usually a little pork mixed in, to hit that tender sweet spot. That is, unless you’re using the testicles…

Kevin Meehan, the former Café Pinot executive chef and guy behind the pop-up Kali Dining, has become quite the kitchen rebel since leaving his Patina Group post. Among the ingredients served at his underground restaurant: yep, Bison testicles. Scratch that—bison testicle sashimi. Resembling a verdant landscape sculpture, the bison balls are sliced thinly and then cold smoked. A canopy of seasoned kale chips and a few dollops of “onion tar” crown the raw, pink slices. A creamy white garlic velouté provides the—ahem—finishing touch. The testicles themselves are mild in flavor, with a slick mouthfeel similar to mimicking sashimi-grade salmon. They’re downright velvety.

The President can go ahead and have his grilled bison; and we Angelenos can have our bison balls sashimi. Yes, we can.