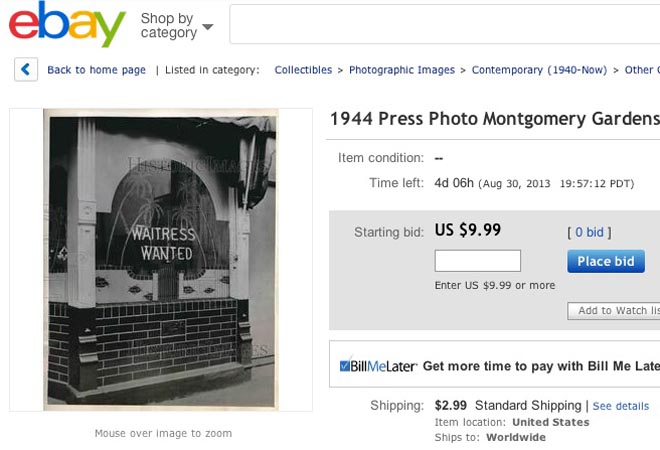 This gloomy photograph of the Monterey Gardens Café in Los Angeles just appeared on eBay and looked to me like a great lost still from some film noir. It’s not quite “For sale: baby shoes, never worn” but I loved the neon version of “Waitress Wanted” and the badly painted bricks and had to give it a little poke and see if I could turn up a little story about the place. A quick search didn’t turn up much, I couldn’t find owner Leo Brock in the phone book, the census, or in the paper much. According to the caption on the 1944 image, he was just frustrated with high waitress turnover, so he had a permanent sign installed in his window. Brock shows up in the paper a couple of years later when he installed an automated tortilla-making machine at his downtown restaurant. “You can’t get any of these youngsters,” Brock complained. “To stand over a hot metate all day.” He later opened a restaurant in Newport Beach called Dangerous Dan McGrews and seems to have lived there until 1972. Who will solve the mystery of the Monterey Gardens?