Home Uncategorized The McRib Returns and a Small Piece of Me Dies on the... 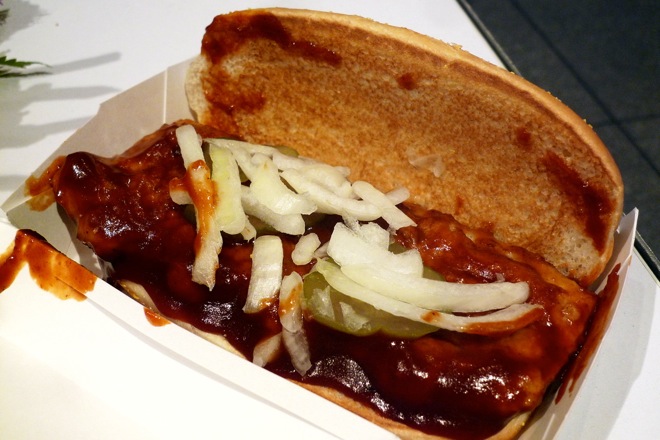 As the McRib sandwich returns to L.A. today for a limited time, it’s a strange reminder that pork, bun, tangy “BBQ” sauce, pickles, and onions can go dangerously wrong.

America’s creepiest clown is peddling a new promotion, with “101 Reasons to Eat a McRib,” but all I need is one damn good reason not to: it’s nasty as all hell. Using no doubt the cheapest finest cuts of what may have been considered pork in another life or in some perverse dimension, McDonald’s pulverizes this “meat” into an appetizing convalescent home texture, mixing in a secret blend of water, salt, dextrose, BHA and BHT, propyl gallate, and citric acid to optimize shelf life flavor and to ensure that you, the consumer, might enjoy a litany of potential health problems in the future. To rub figurative salt into the wounds (not to mention the 980mg of actual sodium), some culinary cacodemon thought pressing the porcine pulp into a form vaguely resembling ribs would add to its charm and instill some sort of subconscious association with true barbecue.

Never missing a beat, The Simpsons famously parodied the McRib with Krusty Burger releasing its own “Ribwich” years ago:

Krusty: Listen, about the Ribwich. We won’t be making them anymore. The animal we made them from is now extinct.
Homer: The pig?
Otto: The cow?
Krusty: You’re way off. Think smaller… think more legs.

This science experiment of a snack appears to be a mix of a cardiologist’s worst nightmare and a chemist’s wet dream. Having expounded the virtues of the “patty,” allow me to tantalize your taste buds with some of the goodies to be found in the bun. An artisan baker no doubt rises early in the morning to carefully prepare each batch, selecting only the best bleached flour, the highest of the high fructose corn syrup, carefully hydrogenated soybean and/or cottonseed oils (he likes to surprise you!), and just a touch of sodium stearoyl lactylate, datem, ascorbic acid, azodicarbonamide, mono- and diglycerides, ethoxylated mono- and diglycerides, monocalcium phosphate, enzymes, guar gum, calcium peroxide, and calcium propionate for a special hand-made experience that only the McRib can deliver.

One benefit of the bun is that it does add 3g of dietary fiber, just in case your brain and immune system aren’t already working on borrowed time telling your intestines to flush this rapacious shit out as quickly as possible.

Pardon the rant, but I don’t know how this sandwich still exists. Let us pray that it dies out faster than the folks who might suffer the ill effects of pounding down Frankenfoods.

This rant is based on a longer, meaner rant I made on my personal website three years ago, well before becoming a vegetarian. And yes—in case you couldn’t tell—I’m still mad about the McRib.