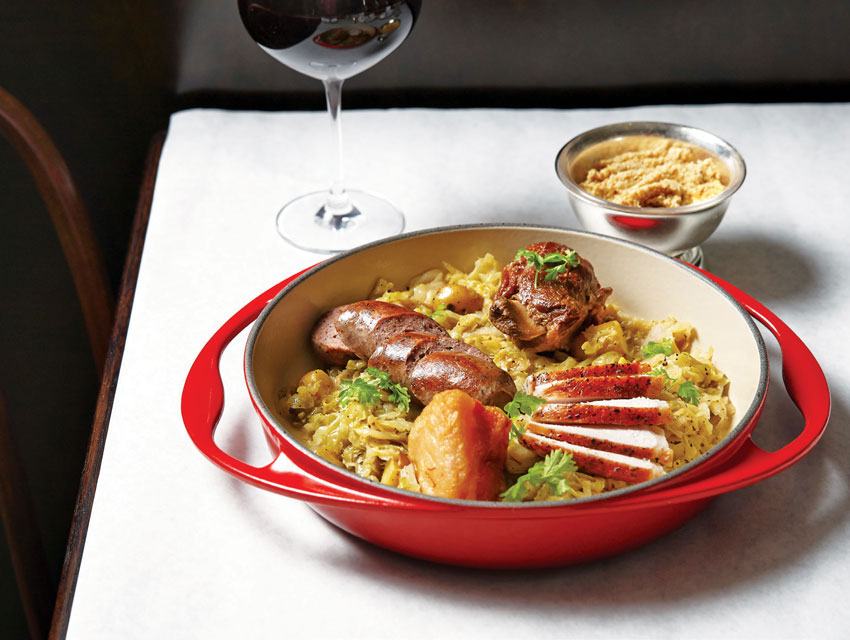 I’ve been eating Kris Morningstar’s food for almost a decade, and at each place something stood out. Shrimp on a pillow of pureed popcorn glowed with creativity amid the fire pit and city neon of Blue Velvet, a loungey act on the outskirts of DTLA. At District, on Sunset Boulevard, the kidney sauce that enrobed the buds of gnocchi was as memorable as the sweetbreads lacquered in a reduced Banyuls vinegar-and-beef broth glaze. But it was the warm, duck fat-enhanced bundles of Yorkshire pudding in the bread basket that knocked me back in my seat. During his two years at Ray’s & Stark Bar, the Renzo Piano-designed glass rectangle at LACMA, Morningstar would leap from cheesy flatbread to a skein of squid ink pasta flecked with serrano chile to roasted Cornish hen served with a thicket of vinegar-laced dandelion greens, the last being a dish that said everything about the chef’s delicate yet brawny style.

While I’d know his cooking anywhere, I have to admit that before going to Terrine, his latest venture, I didn’t realize what an accomplished French cook Morningstar is. Terrine is a brasserie, but it doesn’t hew to a strict interpretation of the genre like Bouchon does. You can find truffled-rice agnolotti, the squid ink pasta he brought from LACMA, even fish-and-chips (with, I might add, a crackling crust as good as any tossed my way at Leo Burdock when I was a student at Dublin’s Trinity College). But the through line here is not California-inflected French, either; it is authentic French cooking as interpreted by a chef who doesn’t hold back. This is a guy who will drop some pig trotters in with the poaching noggin to lend trembling consistency to the sublime head cheese. His French onion soup—its top layer a spitting, bubbling seal of Comté cheese—looks like a science fair project demonstrating how the Massif Central was formed.

Not surprisingly, before opening in the old Pane e Vino space on Beverly last December, the chef struck up a partnership with a pair of Gauls: Stéphane Bombet, who got into the business in Paris, and François Re-naud, former wine director at the Tasting Kitchen. Bombet helped promote Ricardo Zarate as the chef expanded from running a counter at Mercado la Paloma near USC to helming multiple locations with his brilliantly original Peruvian food. As a charter project for his newly formed Bombet Hospitality Group, he and Morningstar wanted to create an establishment that is like a bistro but with more verve. No less an authority than The Oxford Companion to Food allows that “drawing a line between a brasserie and a bistro is no easy matter.” Both are supposed to produce modestly priced food in a setting without airs, but brasseries are buzzier (after all, Alsatian brewers envisioned the high-ceilinged halls—brasser means “to brew”—as taprooms). Belon oysters glisten atop heaps of ice. The herring in sour cream might be presented in a ceramic serving utensil rather than on a plate. The waiters pop the cork on a bottle of Zind-Humbrecht riesling while flicking a towel over a table as if waving a starting flag.

Terrine has its apron-clad waiters, too, along with the beveled deco-style mirrors and bentwood cane chairs one would hope for in a brasserie. You might see Ryan Wainwright behind the burnished copper bar spritzing a cocktail tumbler with absinthe to give it an extra dimension. In place of café tables fronting the boulevard, there’s a stunning patio in back scented with rosemary and lavender, a light-strung Javanese bishopwood tree its central axis. The exterior space’s Mediterranean vibe is ideal for something like the socca, a chickpea flour crepe sold in the markets of Nice and topped here with chopped parsley, olive oil, and fennel pollen. Shifting toward the Atlantic, Morningstar gives the lapin vallée d’Auge, a classic Norman rabbit leg, the orchard treatment, bathing it in a sauce of cider and calvados-infused braising juices, then adding whole baby carrots and fork-soft apple wedges.

A man who’s thrown down with a kohlrabi velouté on the Esquire TV show Knife Fight, Morningstar is able to remind us of how the careful interplay of proportion, refinement, and flavors elevates this most robust genre of French food. Born in Inglewood, then raised in Redlands and near Parsippany, New Jersey, he got a taste of chefing from the hotel where his mom worked. The chef there would supply him with buffalo tri-tip for his Boy Scout camp-outs (although—no worries—the recipe for a mean whiskey-and-garlic marinade was for other occasions).

Terrine is Morningstar’s first run as a chef-partner, but what’s exciting to me is how well his signature style—more meaty than produce driven, delighting in lesser cuts that require long braising or grinding and curing—melds with rustic French cuisine. He cooks the duck fat pudding to order, keeping the drippings smoking in the Le Creuset terrine so that when the sage-filled batter is poured in, it forms an instant crust. The andouille on his charcuterie plate is smoked for six hours, until the thing is almost bursting through the casing. Beside it, offering a textural counterpoint, is a wedge of smoky deckle of beef, that most tender section of the brisket. In the Le Creuset oven dish, choucroute garnie, pork loin, riesling-braised shank, and a gorgeously fatty jowl lie on a bed of slightly funky kraut that Morningstar pickles himself. To make the marrowbone appetizer, he adds shredded braised beef cheek and diced twice-fried potatoes to the gelatinous marrow. Respectful of heritage, it is undeniably Morningstar, parrying big-flavored meatiness with a ruffle of freshly shaved horseradish.

Morningstar didn’t invent that sort of key contrast, but he achieves a lot with it. The kitchen is especially adept with vinegar, relying on it to sharpen matters, as with his salad of shaved raw brussels sprouts, in which sherry vinegar combines with little hunks of fresh Braeburn apples and dates to bring clarity to the vegetable. In his stellar boudin noir, a deglazed and reduced vinegar sauce forms a ribbon around the parsnip puree and focuses the barnyard notes of the traditional blood sausage. He modulates what would be an off-the-charts gaminess of the squab crepinette—squab breast stuffed with wild mustard greens and wrapped in caul fat—with a sauce that revolves around the fino sherry flavor of vin jaune from eastern France’s Jura Mountains. And the aged vinegar in the side of carrots almondine provides a gentle tug of acidity to the butter sauces that dress the whole-sautéed vegetables.

So it’s a letdown to receive a side dish like the pea tendrils, which drown in grapeseed oil from the soffritto that accompanies them. Same with the cauliflower florets, which you have to fish from the greasy pool that’s been given the name “brown butter béarnaise.” It comes across as an over-the-top, ready-for-Twitter grease bomb that does nothing for the ingredient it is supposed to showcase; a real béarnaise—a reduction of vinegar and shallots serving as the base for a weightless egg sabayon—would have created a silken cushion into which drawn butter would be whisked.

With so much fat sloshing around, the dish becomes a heavy monotone and an outlier on a menu in which ingredients and textures often play off one another to temper the heartiness. The wild striped bass would sink in the carrot-and-caraway seed puree without the crunchy, almost minced fried potatoes scattered throughout. For that Teutonic classic, spaetzle, Morningstar sautés the diminutive twirls of gluten-free flour (from Lena Kwak’s Cup4Cup company) until golden; a runny egg goes on top before it’s all strewn with shaved pecorino and, for more of that crunch, strips of raw scallion. Not done right, fried pig’s ears can split the horrors between fat and gristle, but Morningstar treats them like a duck confit, poaching the whole ears in lard before cutting them into strips that he fries to order. Crisp, cartilaginous, Rabe-laisian, they’re fantastic to dunk into the cup of sauce gribiche, which is full of Dijon mustard, shallots, capers, and fines herbes.

I’m not sure I’d ever see fried pig’s ears on the menu at Brasserie Lipp, but who cares? Morningstar isn’t merely imitating. He’s having some fun along the way, like with the mini birthday cake on the menu. Figuring customers would be bringing in birthday cakes, he decided to feature one himself—a squishy, chocolate-sheathed cluster of toffee nuggets, cocoa nibs, and caramel-chocolate “pearls” that shouldn’t be relegated to birthdays alone. Of course you’ll also find renditions of old standbys, including a good apple-and-pear galette with caramelized fruit juices oozing over the flaky pastry that sits beneath a ball of melting honey-rosemary ice cream. Old school yet restrained is a slice of traditional baumkuchen, a runway of marzipan layers, each broiled individually before the next is laid over it (baum means “tree” in German; the layers are supposed to be like tree rings). Given a dollop of citrus marmalade and a scoop of citrus-leaf frozen yogurt, it offers a delicate ending to the meal.

And something delicate is definitely in order at Terrine, a restaurant where it’s easy to get carried away, ordering dish upon dish. If you have room, though, and want to take a quick tableside trip to the Béarn, that pocket of southwest France, order the garbure. Think of it as Morningstar’s concept of pot-au-feu, with pulled-duck confit, ham hock, and shell beans. As you’re nearing the end, the waiter presents a small measure of strong red Corbières wine to splash into the intense broth; it opens it up, almost like adding a droplet of water to a potent scotch. I tend to savor those last spoonfuls at the bottom of the bowl. Why would I hurry? I’m in a great brasserie.

Atmosphere: Paris on the Mediterranean

Noise Level: Not so loud that you can’t carry on a conversation

Kid Friendly? Fish-and-chips might do the trick for littler ones

Espresso Is the Ingredient Your Martini Has Been Missing All Along