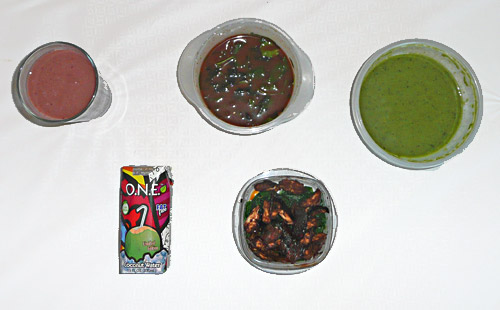 Last night, with only one solid meal all day, I was famished—a bit weak in the knees and nowhere on my face was to be found even a hint of that wide beatific smile of a certain actress. Nonetheless, anticipating, like most normal working people without personal chefs, that I’d be unable to just whip up the “meals” that would constitute Day Two of my Gwyneth Cleanse, I got a head start on cooking. This would entail making two soups from scratch: a pea and basil that had me chopping garlic and onions and a miso watercress that was a singular pain in the chopsticks. Bonito flakes! Shitake mushrooms! Dried wakame! Miso paste! Turn on the heat, turn off the heat, strain this, discard that. Instant miso soup is beloved for a reason. For today’s mid-morning smoothie “breakfast,” I was blending raspberries and rice milk and whey protein and ProGreens. Even Gwyneth’s “detox teriyaki chicken” that will constitute lunch required a seven-ingredient marinade. When the stately BBC announcer suddenly came on the radio to announce, “Good morning, it’s 8 a.m. G.M.T.” I realized I’d been at it for nearly two hours and thought I was going to drop. (The results—this is all I’m eating today—are pictured here.)

It was at 1:30 p.m. yesterday that I ate solid food—and by solid I mean roughly cut greens with a fragrant carrot and ginger dressing that I savored. The handful of mixed pumpkin and sunflower seeds that was my mid-afternoon snack tasted as if they’d dropped from the tree of life, so desperate was I. At 6 p.m., my husband joined me for my liquid dinner of broccoli and arugula soup—it looked like pesto but don’t be fooled—only he ordered off-menu and accompanied it with a hunk of crusty, divine-looking zucchini bread from which I averted my eyes as much as possible. I asked him what he thought of dinner. “My favorite part,” he said, “was the bread.”

For the remainder of the evening my husband proceeded to fill up on various snacks, including chips and Raisinettes, that he paraded into the living room like a 6-year-old showing off his Hot Wheels collection. Which is not to say that he hasn’t provided help. The kitchen was Armageddon—the Gwyneth cleanse makes an unholy mess of it at least twice a day—and I left this morning with him scrubbing pots and pans and muttering something along the lines of: “I bet Chris Martin doesn’t have to clean up after this!” My Gwyneth annoyance advisory is solid orange right now; his is already in the red.