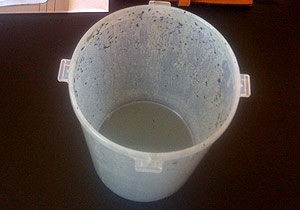 Since rising at 7 a.m., I’ve subsided solely on a glass of lemon water, a cup of herbal tea, a periwinkle-blue smoothie (pictured) flecked like a piece of expensive stationery, and 11 ounces of coconut water. It may take California the next 15 million years to float into the ocean, but I’m giving myself two days before it happens to me.

The economy is tanking, factions warring, infrastructures imploding. Who doesn’t need a good cleanse these days? This is why I’ve decided to heed Gwyneth Paltrow’s clarion call, put forth last week on the actress’s much-poked-fun-at Web site Goop.com, to withstand a seven-day long New Year’s detox. Gwynnie even provided a daily menu of her own creation (plus some unsettling details on how to accelerate sluggish “bowel movements”—just typing that didn’t feel right, and wasn’t castor oil the punishment applied in Little Rascals films?). “I will be suffering along with you to kick start my year a bit lighter,” Gwyenth wrote, admitting that she had a “few pounds of holiday excess” to shed—where, on her left elbow? Truth be told, I don’t have anything I need to shed, either, but I for one did not want her to suffer alone, and most definitely not in silence. We have so much in common—my Godfather is also Steven Spielberg and a paparazzo once caught Brad and I doing a little nude sunbathing in the West Indies, too—that this will just strengthen the bond.

That’s how I ended up forking over $135 last night at the Pasadena Whole Foods to procure my Gwyneth-approved victuals. Clerk after helpful clerk led me to grapeseed oil, agave syrup, macro greens, bonito flakes, sweet white miso paste, dried wakame. For the next week, no dairy, gluten, meat, shellfish, processed foods, sugar, alcohol, or “nightshades”—not a 1980s TV show after all, but code for potatoes, tomatoes, peppers, and eggplants, four staples of my normal diet. Before the clock struck midnight last night I’d eaten whatever I could get my hands on, washing it down with half a bottle of Pinot Gris and some Golden Globes-watching M & M’s.