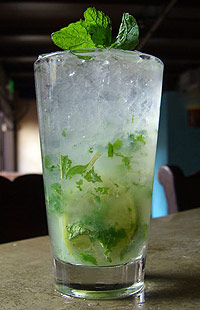 When outlining her recipe for the cucumber, basil, and lime juice that constituted Day Three’s afternoon “snack” on the Gwyneth Paltrow-approved detox, the actress tells her acolytes to think of the drink as “a detox-friendly mojito.” Gwyneth, I knew mojito. Mojito was a friend of mine. Cucumber, basil, and lime juice, you are no mojito. (Don’t get your hopes up—that’s an actual mojito pictured here.)

I am officially at the halfway point of operation Gwyneth detox, and it’s taking all I got to keep from being fully submerged. That 4 p.m. “snack” yesterday was squeezed between my “lunch” of another blueberry and almond smoothie—try downing one of those after it’s been sitting in a black car for a couple of hours—and a “dinner” of super greens juice and miso soup. By 5 p.m. I had a headache, was a grouch, and needed Mommy to give me a time out—or at least a gimlet. Ah, the cocktail hour. I don’t know who invented it, but my gut says it was a parent. When detoxing, just how does Gwynnie muddle through the Apple and Moses meltdowns without a little v-i-n-o?

The oddest part of eating everything through a straw yesterday was, despite the liquid intake, I’m still thirsty all the time. I go to bed thirsty, I wake up thirsty. And I’m drinking A LOT (Gwyneth’s caps) of water. The upside to not drinking alcohol is the lack of pass-out-on-the-couch-holding-a-cognac-while-watching-House-Hunters-International moments. Those tableaux are humiliating, even if the only one who witnesses them is my dog.

But back to healthy liquids: Every 11:30 a.m., I get a refreshing little jolt of coconut water, and I’m digging that (“more potassium than a banana,” according to the box, and on super-sale at Whole Foods for 99 cents apiece!). Reminds me of the last time I drank coconut water. I think it was the summer of ’79, when a beach bum named Barry would scramble up a palm tree in front of the Reef Hotel, yank one down, and poke a hole in it for me to sip on Waikiki Beach. If that wasn’t living like a movie star, nothing is.