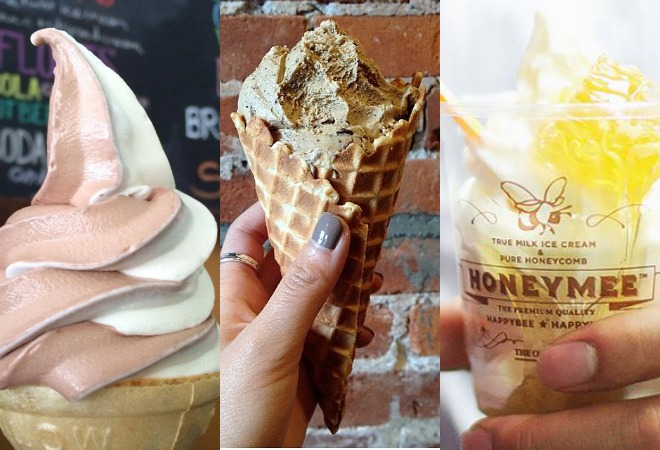 When a city boasts year-round sunshine, a robust ice cream economy should be expected. But this summer, the forecast calls for an unprecedented wave of new shops serving artisan ice cream, with many arriving from out of town. Sounds good to us—we’re for whatever helps combat those triple-digit temperatures in our near future. Here’s what’s in store:

Big Gay Ice Cream
Hometown: NYC
Set to open near the corner 9th and Broadway in Downtown, adjacent another New York import (The Ace Hotel) this wacky soft serve shop will offer cones like the Salty Pimp (sea salt, caramel, and chocolate) and the Bea Arthur. Expect an opening later this summer.

HoneyMee
Hometown: Korea
Although HoneyMee isn’t based out of Korea, this quaint Koreatown shop specializes in milk-flavored soft serve topped with fresh honeycomb, a popular treat in Korea during the summer months. You can even try it layered inside a sweet bun for the ultimate ice cream sandwich.

Van Leeuwen Artisan Ice Cream
Hometown: NYC
A fleet of retro-inspired ice cream trucks serving organic scoops has already hit the streets in L.A. (you can follow them on Twitter), but NYC-favorite Van Leeuwen has its sights on another goal: A Downtown brick-and-mortar planned for this summer.

Gelateria Uli
Hometown: L.A.
One of the first tenants of the Spring Street Arcade (future home to Guisados and Bierbeisl Imbiss), this locally based gelato shop serves 16 flavors, including sesame-halva and poblano pepper. If you’re need of a caffeine boost, opt for the espresso-topped affogato.

Bulgarini Gelato
Hometown: Altadena
The famed Italian gelato wizards behind Bulgarini have opened a cart outside Picnik in Pasadena. Is there a better way to chase your gourmet sausage than with a scoop of Sicilian pistachio gelato?