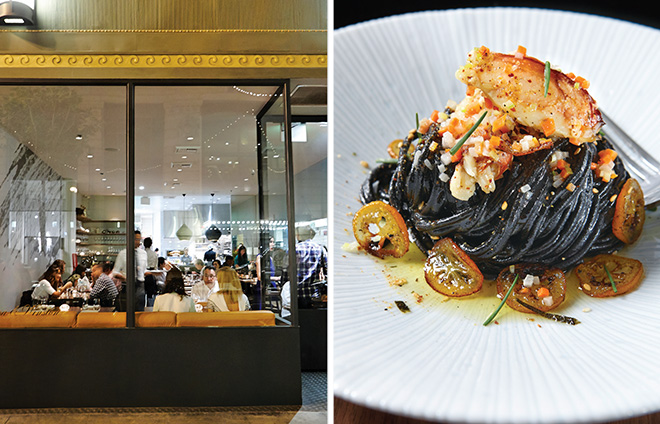 Growing up in Spain, I became accustomed to the rhythms of small-plate dining early on—the tumbler of Valdepeñas red, the toothpick in the potato omelette, the garlicky scent of razor clams, the stacked saucers tallied to calculate the bill. When A.O.C. embraced the format back in the early aughts on West 3rd Street, I was delighted. It took courage to delve into a form of eating that was relatively unheard of in L.A. outside of dim sum halls. During the recession, a phalanx of other restaurants would follow suit, in part because cropped portions were fashionable but also because of economics: Diners could walk away having, at least theoretically, spent less while the management could squeeze more money from every bite.

The ladle is swinging in the other direction, with chefs trading that hypercasual ADHD style of dining for its more focused sibling: the tasting menu. Spread over multiple courses, the plates may be no larger, but they are more coordinated, each intended to dovetail into a seductive whole. Substitutes aren’t allowed. The chef is decidedly in charge. Ludo Lefebvre gave the format a validating boost when Trois Mec opened a year ago, offering a single tasting menu and nothing more. Recently Ari Taymor of Alma and Miles Thompson of Allumette switched over to tasting menus as well. The ranks are only growing with two high-profile additions: Maude, from Top Chef Masters host Curtis Stone, and Orsa & Winston, from Josef Centeno, who’s earned a national reputation with downtown’s Bäco Mercat. That’s roughly where the similarities between the two end. At Orsa & Winston,Centeno is cooking in the imaginary borderland between Italy and Japan, crafting a four-course family-style tasting menu for $50, five- or eight-course extensions ($60 and $85, respectively), a smattering of dishes that can be ordered solo, and—why not?—a 20- to 25-course omakase extravaganza for $195. There’s remarkably little overlap between the options, too. Thin as a blade and dotted with grilled kumquats, the whole rosemary-laced sayori fish I was served one night at the counter sparked a conversation with the person beside me: It wasn’t part of her menu, nor was her vivid green English pea-and-nettle soup on mine. Done wrong, a tasting menu can seem like an overglorified banquet, where every plate is the same out of necessity. Done right, it offers a chef the opportunity to carry on a dialogue with the diner, illustrating not merely how ingredients relate to one another within a dish but also how one dish can relate to the next.

At Maude, Curtis Stone runs with that notion, delivering what is in essence a doctoral thesis on a given element. The month he opened, the theme was citrus, with each dish from his $75 nine-course menu intended to showcase the fruit he gets from farmers and local canyon groves. (Next up: artichoke.) Step into the dining room along South Beverly Drive and you might think you’re in a Belgravia supper club. The 25-seat interior is tight and contained, with white ceramic-tile walls, retro lighting, and an open kitchen that faces an almost industrial-looking wall of bottles. Botanical art and a long turquoise banquette add a dash of color to the space. Stone, known for his Celebrity Apprentice gig before hosting Top Chef Masters, named this, his first restaurant, after his grandmother, whom he channels with mismatched china and silverware. Before he landed on TV, Stone worked for Marco Pierre White—the London tabloids report on his antics so often, they simply refer to him by his initials, MPW—a chef who transmits the bounty of England (the grouse, the sole, the heritage breeds) through serious French technique.

Stone’s cooking isn’t necessarily cross-cultural, but he does cast a wide net, taking inspiration from many lands. Spanish pink cava gelée glistens like diamonds on a tiny oyster topped with caviar. A gorgeous bhaji, an Indian onion fritter, sits on a swoop of lime-cilantro cream, while tiny mussels are delicately fried before being popped back in the shell on a cushion of deep-hued aioli that you might dab with your finger when no one is looking. General manager Ben Aviram strikes a civilized starting note when he pours a measure of flinty Greek Moscofilero into a tulip glass so fine, you feel the stem would snap if you held it too tightly. The spiny lobster crudo basks in a crimson turnip cream, lemon pudding and citrus salt giving it lovely sharp angles. A translucent leaf of Serrano ham—both cured and dried—is concentrated enough to counter the acidity of the navel orange in a steaming cup of carrot-orange soup. In the eighth and penultimate dish—a juicy rectangle of Snake River Farms’ rib eye—Buddha’s hand citron pudding rides through the luxurious richness of the cut, which is accompanied by a browned, rosemary-laced square of potato rösti and tender braised beef cheek.Not that the citrus is always that pronounced during the progression: It’s faint at best in the mandarin gelée capping the terrine of chicken and black trumpet mushrooms. When the most assertive flavor (and it can be aggressive) comes from a quenelle of mustard sorbet set on a scattering of sunchoke crumble, you might wonder if the single-ingredient thing isn’t slightly forced. This conceit didn’t detract from my meals here, but challenges may lie ahead for the kitchen as it works its way through the seasons.

Where Maude hides behind a frosted-glass door in Beverly Hills, Orsa & Winston blazes downtown, fronted by a wall-size window that looks onto 4th Street. The tables, floors, and wineglass shelves are bare wood; the lone decorative element is a photographed brushstroke of umeboshi-soy paste magnified into a mural. It was around the corner, at Bäco Mercat, that Centeno introduced L.A. to the merry pileup of oxtail hash, cheddar taters, and horseradish yogurt he wraps in a pita-like pocket. Then came Bar Amá, next door to Orsa & Winston, where he pays tribute to the Tex-Mex he grew up on in San Antonio. If that restaurant marked a homecoming, Orsa & Winston speaks to the venues where Centeno became a cook: New York’s La Côte Basque and Los Gatos’s Manresa, under David Kinch.

Rather than the pearl-buttoned western shirts you might see at Bar Amá, the corps of waiters here dons white spread collars and narrow navy ties. Amid the buzz, wine director Sally Kim carefully wipes the expensive glassware free of lint. The place is unabashedly ceremonial, a cool, knowing alternative to white tablecloths as Centeno, to borrow the actor’s cliché, takes you on a journey.

You taste deeply charred octopus tentacles sitting on an impasto of fermented black garlic. Then comes sunchoke-egg custard in a hand-thrown cup, cleaving at the touch of a spoon in a way that frames the fruitiness in a gooseberry vinaigrette. Bonito flakes lend an exquisite tang to fennel panna cotta, while the brunoise of rhubarb acts like mostarda on the kampachi. More than once I’ve found myself on the fence about the restaurant’s Italo-Japanese compact—crudo has never struck me as having the ancestral power of sashimi—but tasting the “vitello tonnato,” a roulade of seared veal holding a strip of bigeye tuna set off by a middle layer of deep green blanched shiso leaves, I’m all in. I’ve eaten Centeno’s cooking many times before, but I don’t recall any period in which the dishes were as finely tuned. In certain creations he takes the carpaccio idea as a starting point, building up flavors without adding height. The slivers of geoduck cooked on the flattop griddle are startlingly pure, the oceanic notes of the hinged clam emphasized by the dry sear. A few shavings of fennel, a sprinkling of diced pomelo and pickled beets, and it’s done. Served on a hot plate, thin slices of homemade pork testa are just starting to render when a waiter lays them before me, their fat mixing with olive oil and furikake seaweed. The irony is that the seemingly least successful dish is the most carpaccio-like. The 30-day dry-aged beef is probably great, but with the truffle, the truffle butter, the pecorino, and the marrow, I couldn’t taste it. Better by far is the 32-ounce pork porterhouse toward the end of the family-style tasting menu. A waiter brings it out, perfectly cross-hatched, on a cutting board, before returning it to the kitchen to be thickly sliced, then garnished with creamy mascarpone and purple Okinawa sweet potato agnolotti.

Pastry chef Isa Fabro, who came over from Hatfield’s, is up to the challenge of following such inventiveness by seeking to shade rather than outshine. A brittle-crusted chocolate tart, decked with caramelized bananas, keeps things light. In her hands crostata can be pear and huckleberry with brown butter streusel in a Le Creuset baking dish or a flaky puck moist with greengage plums, a variety that’s at its peak for about two weeks. I can’t see a preparation so responsive to the seasons without thinking of it as the very opposite of those ossified tasting menus of the 1980s. Perhaps the original dishes had their merits, but they could seem like the umpteenth cover of a much-covered song. Dessert was often where the cynicism seemed clearest: cube after coulis-draped cube ranged across a massive plate. Few terms make me as apprehensive as le grand dessert gastronomique.

To an extent, small plates were a response to that sort of grim stodginess. But as much as I enjoy them, I’m glad to see chefs moving to reclaim the contours of a meal—without sacrificing their playful curiosity, like when Stone explores the fleeting quality of citrus.

The dessert at Maude doesn’t just conclude the menu; it punctuates the dialogue when pastry chef Vannessa Garcia shapes lemon curd and yuzu-crème fraîche sorbet into a miniature sculpture on a shortbread platform, an airy hempseed crisp sticking from the top like a lace sail. Stone’s not a huge star, but among Bravo watchers he’s celebrity enough to have sheathed Maude in media gloss. In fact, he does the reverse. If there’s time, he comes out of the kitchen to grate a cured duck yolk—its consistency like Grana Padano—over a fist-size raviolo of duck, the sauce an interplay between lush smoked goose fat and the popping beads of finger limes. He sports a telegenic bedhead and a stubbly beard, but standing beside you in striped socks and clogs, the apron-clad Aussie keeps the focus on the food, not him.

Kid Friendliness: A little too grown-up

Drinks: Half bottles and magnums available, no liquor, $35 corkage