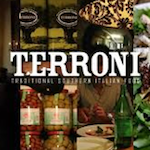 Terroni, an Italian concept based in Toronto, opened its first American location on Beverly way back in 2007. After diners got over the inital shock of having to cut their own pizza, they filled the lunch and dinner spot constantly. So, it comes as no surprise that Terroni geared up to expand in L.A. The group opened a new outpost downtown this past Tuesday. Besides the location, not much is different at the new Terroni. Here, the five things you should know about Terroni Downtown.

❶ The bar program at Terroni downtown is more extensive than the one at the first L.A. location; Kim Velez is the restaurant’s bar manager. Terroni’s Pimm’s Cup is scented with fresh herbs from co-owner Shereen Arazm’s Hancock Park garden.

❷ Terroni downtown occupies a space that was built in 1924 to be the City National Bank. Most of the original architectual details remain and are highlighted by modern elements installed by architect and designer Ralph Giannone.

❸ In the main dining area, a long, curvy red chandelier hangs below the original ceiling. It is modeled after Italy’s Autodromo Nazionale Monza, where the Formula One Italian Grand Prix takes place.

❹ Weekend brunch is available at Terroni downtown beginning this weekend. While the Beverly location has never offered brunch, both locations will serve brunch by the first week of August.

❺ Terroni will open a retail space at its downtown location in order to offer their signature olive oils, wines, and tomatoes for purchase.

3 New and Notable L.A. Restaurants to Try in June

3 New L.A. Restaurants to Try in May