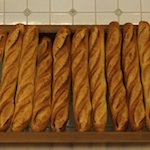 Last week, Etchea Bakery quietly opened its doors downtown on the corner of Third and Hope. Partner Christine Splichal said this was intentional, “We aren’t the type to have a grand opening, we just want to start slowly and make sure the neighborhood knows we’re here for them. We want some time to practice and get it right.”

It sounds as quaint as the mini-marketplace, bakery, and cafe appears. Bakers rise early and work late—they aren’t the superstars of the food world, and usually aren’t after that kind of fame. Baker John Baptiste Garacochea is no exception. But his bread speaks for itself: gorgeous, lean baguettes march along a rear wall, golden brown with even, delicate ridges and pointy ends. Hearty, seeded boules are sliced and used for sandwiches. Fruit and nut breads make smell of autumn. But there’s more to Etchea than just some fabulous bread. Here now, five other things you should know about L.A.’s newest bread bakery.

❶ That photo collage on the wall near the coffee station? It features photos of Garacochea and his father and grandfather. This is a family of bakers. Though it would be nice if Garacochea was baking on site, the breads are actually delivered daily from the family’s commercial bakery in Hawthorne.

❷ Linda Griego, one of our city’s former deputy mayors, is a food lover and partner in this project. Her other restaurant, Engine Co. No. 28, is just a few minutes away on Figueroa and 7th.

❸ Chef Laurent Quenioux has designed the menu here. But if you’re concerned that his fantastical creations might not mingle well with artisanal bread, you needn’t worry. Here, Quenioux has featured dishes from the Basque region of France. This is the only place in town serving a Basquaise-style pizza, which is a lot like a tartine on ciabatta. Do try the Gateau Basque too, another hard-to-find classic from the region.

❹ This is one of the few cafes in L.A. where you can get a cup of La Colombe coffee (a French-American brand) and purchase the beans to take home.

❺ Etchea, the name of the cafe, means “home” when translated from the Basque etxea. It is pronounced “eh-chi-ah.”