Home Uncategorized The Five Things You Need to Know About Acabar, Now Soft-Open 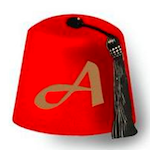 “The funny thing,” says chef Octavio Becerra, while waxing poetic about Acabar,  now soft-open on Sunset and Stanley, “is that I used to come to this place when I was in high school—I went to Fairfax High. It was Dar Maghreb for 40 years, and back then, when I needed to take a girl out on a date, we either went to Lawry’s or Dar Maghreb. We’d say, ‘come on girl, let’s go eat with our hands.’ Like we were so cool.”

Acabar has been produced by Frederic and Nicolas Meschin as well as Sue Cho of Beverly Grove’s The Little Door and The Little Next Door. Octavio Becerra (formerly of Circa and Palate Food & Wine) is running the French spice trail-inspired kitchen, and Julian Cox and Josh Goldman have done the cocktails. It’s an all-star affair. Here’s what you should discuss over a cocktail and some mezze.

❶ It’s true that Acabar is in the space that for 40 years housed Dar Maghreb. Ownership decided to preserve all of the original tile work that decorated the interior, as well as the hand-carved woodwork and stone. Enhancements have been made in the form of white marble bar tops, mirrored walls, and a more comfortable dining room set up.

❷ While the restaurant might sound Moroccan, the cuisine is not entirely North African. Ownership wanted Acabar to honor all of the regions in the world that France has touched, so Vietnamese and West African flavors also feature prominently on Becerra’s menu.

❸ The bar program at Acabar is a bit like a history lesson. Each cocktail is from a specific era and place. Josh Goldman says that he was inspired by Heston Blumenthal’s restaurant Dinner in London, which famously creates each menu item from antique recipe books.

❹ Acabar has three main spaces. There’s the dining room, which seats about 60; the long bar, with a central courtyard; and the lounge. A DJ and live entertainment greet diners and drinkers in the lounge late into the night. Sometimes the entertainment can be risqué, as it was on a recent night when dancers came out wearing very little except a small scarf over their face and a long black skirt.