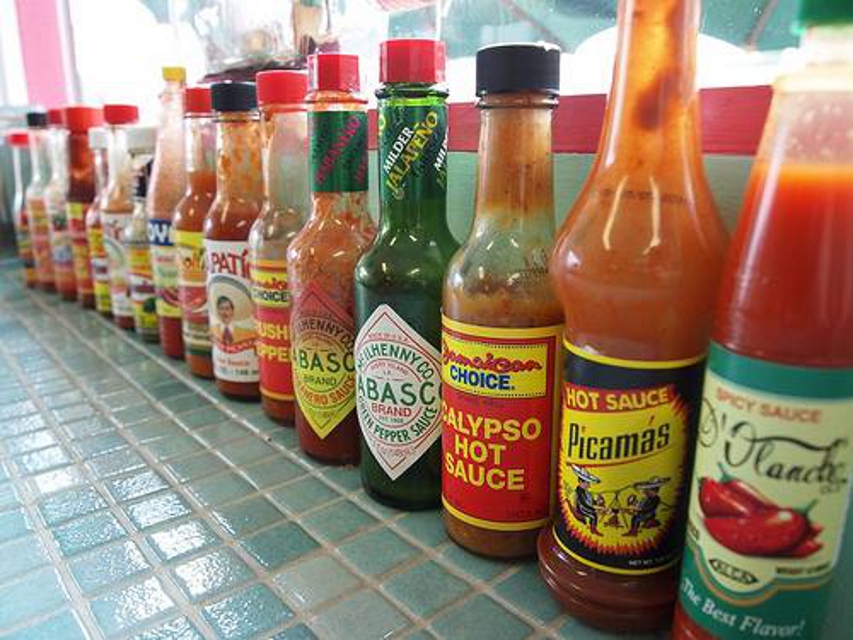 You know what they say: If you can’t take the heat, stay out of the California Hot Sauce Expo. The fiery event made its debut on the West Coast this weekend, taking place at the Rainbow Lagoon in Long Beach on Saturday and Sunday. And lest you think it was just about discovering the most extreme condiments from Los Angeles and beyond, there were a slew of wacky eating contests that took place.

Hosted by High River Sauces, this event brought together 45 of the most peppery, smoky, gnarly hot sauces to one place. The makers were hand to discuss their creations while everyone sampled as much as they could handle. Yes, L.A. is home to Huy Fong Foods sriracha, one of the most recognizable and popular condiments out there, but this goes way beyond that. The names are almost the best part, things like Ghost Scream Hot Sauce from San Clemente; Hella Hot Hot Sauce from San Jose; and Overkill Hot Sauce from Denver; Tabanero from L.A.; and Puckerbutt Smokin’ Ed’s Carolina Reaper from South Carolina.

That last one has over 1.5 million Scoville Heat Units (a jalapeno has about 2,500-3,000), and currently holds the Guinness World Record for the hottest most extreme hot sauce. According to the website, it’s been described as having a roasted sweetness and then “an increasing tidal wave of scorching fire that grips you from head toe. Eyes glaze. Brows perspire. Arms flail.” Fun.

“I love the spicy food culture on the West Coast,” says Steve Seabury, co-producer of the Hot Sauce Expo. “We found some of the best hot sauces in California, but also brought in some of the best from around he world. It will be a true celebrations of all things spicy.”

Seabury, a music industry vet, penned Mosh Pit, a collection of recipes and anecdotes from his years playing, hanging around and touring with metal bands. He’s also the owner of the multi-award-winning hot sauce company High River Sauces, and his first Hot Sauce Expo took place in New York a few years ago. So what’s the most metal hot sauce he’s ever tried?

“Cajohn’s El Chupacabra Hot Sauce,” he says. “It’s more metal than anything you have tasted. Seven of the world’s hottest peppers are in this sauce.”

Big Red’s Hot Sauce won the Scream For Me Long Beach Trophy for Best Hot Sauce, winning over judges like Vic Clinco, owner of the world’s largest hot sauce collection and museum in Phoenix. There were also tastings and several eating competitions open to anyone, including the Puckerbutt sauce eating challenge, and a Bloody Mary Mix Down between local bartenders. Beer and cocktail booths manage to quench the scalded mouths (though milk is best for an inflamed tongue).