Home Uncategorized The Essential T: Tijuana-Style Carne Asada and a Wheel Alignment on the... 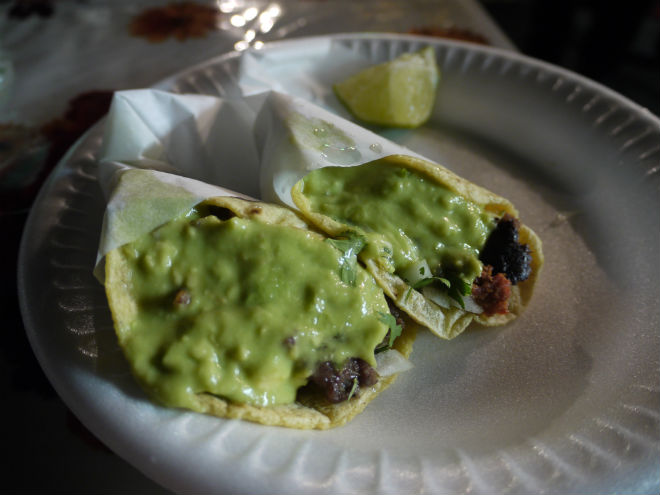 Better strike while the iron (or coal, in this case) is hot  when it comes to a new street food gem, especially when in regards to the illusive carne asada taco. I’m not talking steak tacos. These are steak cuts roasted over mesquite, prepared by a legitimate taquero in the style only found in northern Mexico.

The greatest northern tradition is found in the state of Sonora, but there isn’t a single restaurant, stand, or truck in L.A. serving Sonoran cuisine. You can find good carne asada in other northern states including Baja, California. You might find Sonoran-style, Mexicali-style (at Mexicali Taco & Co.), and the original Tijuana-style tacos created by a taquero from Puebla.

Set up in a llantera, or tire shop in South Central, some Pueblans from Tijuana are making carne asada tacos in the tradition of Tijuana’s El Poblano. It’s a curious phenomena that’s drawn professional taqueros from Puebla from Tijuana to Cabo, and now Los Angeles to make carne asada—in a style that you won’t find even in Puebla.

This is fairly common in South Central, but this family goes the extra mile, with corn tortillas made to order from fresh masa. The steaks are cooked on mesquite, simply seasoned with salt, then chopped and folded into a conical, savory taco that’s sealed by a fruity puree of creamy guacamole.

The taco is shrouded in a white sandwich wrapper to keep Mexico’s green miracle whip on the tortilla as you bite into flavorful steak to the sound of banda, air drills, and the pop of a retreads filling up on tire mounts. You never know how long these itinerant stands will be around, so you’d better hurry. Bonus: you can get your wheels aligned while you dine.