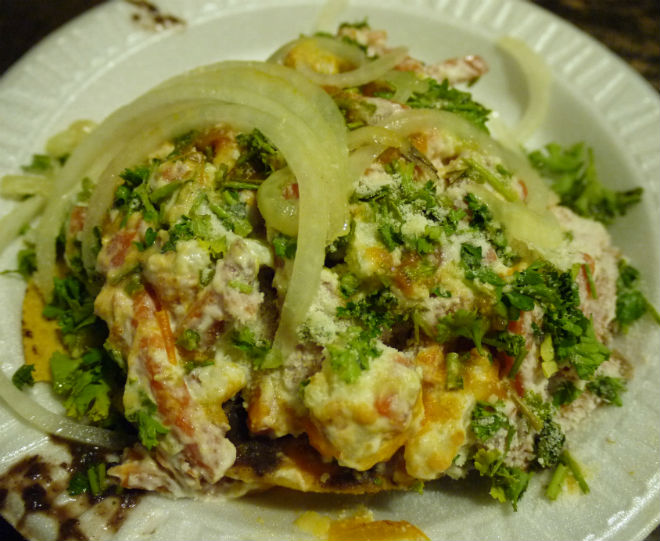 It seems that every culture has their own version of potato salad. If not, it’s assured that they’ve adopted a popular recipe, either based on the American version or one more like the Russian-style Olivier. It’s this saucy, starchy salad that’s the preferred variation in El Salvador, Peru, and Guatemala.

The Guatemalan ensalada rusa can be found in local Guatemalan restaurants. It comes with carrots, peas, pearl onions, beets, and hard-boiled eggs blended with mayonnaise, and then dressed with parsley and cilantro. Sounds delicious doesn’t it? Now, if we could only get it on the street…

Out in front of the Selecto Plaza Mall on 6th at Bonnie Brae, where hair salons, inexpensive clothing stores, and pre-paid cell phone stalls vie for the attention of Guatemalans, Mexicans, and Salvadorans, there are several shopping carts piled high with packages of food. The cooks pushing those carts are serving tostadas piled high with Guatemalan-style potato salad.

Go see the cart on the southeast corner of 6th and Bonnie Brae and order a tostada from la comadre—as Guatemalans refer to each other informally—everyone one says una tostada comadre (one tostada, friend). The cook will respond, “Compadre, quiere con todo?” (Friend, would you like it with everything?)

“Everything,” in this case, means a puree of black beans on a tostada, a crumble of ground pork, Guatemalan potato salad, a sprinkle of dry cheese, tomato sauce, and some caramelized onions. With the warm sun overhead, and a potato salad tostada in your hand, life in L.A. feels like a picnic.

The unnamed stand is located on the southeast corner of 6th and Bonnie Brae in front of the Selecto Plaza Mall.