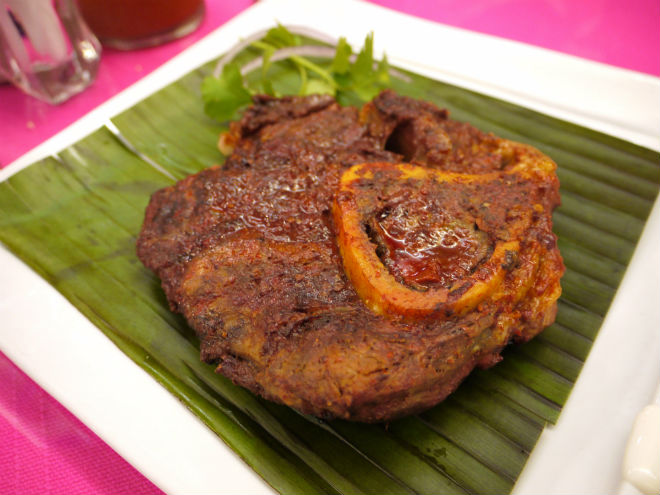 There’s no stopping chefs Jaime Martin del Campo and Ramiro Arvizu. They now have a larger space at La Casita Mexicana, which is attached to a charming gift shop in Bell called La Tiendita. This spring they’re opening their second restaurant, Mexicano in Baldwin Hills, and—last but not least—they’ll appear as chef mentors on the upcoming Spanish language version of Top Chef, Top Chef Estrellas on Telemundo. With all this going on, they’ve still found time to introduce a few new dishes at their celebrated restaurant, which celebrated its 15th anniversary last week.
The sunny pair of chefs serve up a matriarchal-style of home-cooking found in Mexico’s fondas (familiar eateries) and cenadurias (supper houses). Over the years, they’ve educated Angelenos about traditional Mexican cuisine, like the virtues of a hefty slice of beef shank, perfect for tacos.
The chamorro de res, or beef shank wrapped around a Dixie cup-sized ring of bone marrow is slow cooked in an adobo rub of chilis guajillo, seasonings, and vinegar—it’s Mexico’s answer to osso buco. Grab some of La Casita’s homemade tortillas infused with chile guajillo, then slather on the refried red beans and salsa to pair with the soft chunks of beef shank for a rare taste in these parts.

Chamorros of lamb and steer are a popular splurge in Mexico City, and in Jalisco, where the two chefs were born, raised, and learned to cook from their mothers and grandmothers. Is there a better way to celebrate the rise of two humble Mexican chefs than a beef shank taco?