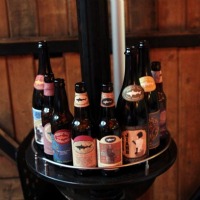 Share
Email
Facebook
Twitter
Pinterest
ReddIt
For the thrill-seeking hophead that has sipped every obscure ale in sight, Delaware’s Dogfish Head and O.C. favorite, the Bruery, will collaborate on a yet unnamed experimental beer utilizing ingredients such as nori, chili peppers, sesame seeds, and kumquats and fermented with sake yeast. Better still, a portion of the proceeds from the beer’s sale will benefit the Japanese earthquake relief effort. The Bruery’s facility in Placentia will begin making the beer on June 15, but the two breweries are holding a celebration right here at West Hollywood’s The Surly Goat on June 14, which will feature an offbeat selection of the Bruery’s and Dogfish’s favorite beers including some which are usually unavailable for purchase.
Editor’s Note: Previously we reported incorrectly that brewmasters from both breweries would be in attendance. This is not the case, and we apologize for the error.
The Surly Goat
7929 Santa Monica Boulevard
West Hollywood, CA 90046
(323) 650-4628