Home Food & Drink The Best Northern Thai Food in America? Head to a Club in...

Restaurants in Thai Town tend to fall into two camps: generalists and specialists. It’s true that you can enjoy a great meal at a generalist—they’re usually marked by hundred-item menus and endless pick-your-protein options—but it’s the specialists that spark real excitement, places that let you know what they do best and why you’re a fool for ordering anything else. Consider the duck noodle soup at Rodded; the papaya salad at Lacha Somtum; the iconic (and sprawling) Southern Thai menu at Jitlada.

It doesn’t get more specialized than Northern Thai Food Club, a spare 12-seat shop that opened six months ago in the corner unit of an East Hollywood mini mall otherwise dominated by famed generalist Pa Ord. A vinyl banner hanging above the door reads “Northern Thai Food,” a neat statement of purpose as far as specialists go. The restaurant’s full name is printed below in Thai script (thanks, Google Translate), which leads me to suspect that the word “club” was omitted in English to avoid any possible confusion over bottle service and bouncers.

You might think the collection of Polaroid-quality photos plastered on Northern Thai Food Club’s windows portends a menu, but in reality your options consist of whatever eight or so dishes fill a large steam table in the center of the room. This limited selection turns out to be a boon for the indecisive and/or uninitiated: everything at Northern Thai Food Club is exceptionally and often absurdly delicious. You are physically incapable of ordering poorly. 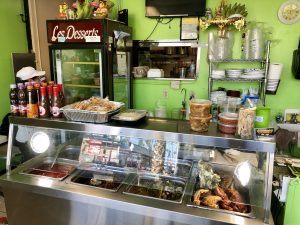 The chef ensuring all this is Amphai Kanyawong, an animated middle-aged woman who wears her hair swept up in a ball cap and an apron knotted around her waist. For years she would wake up at 4 a.m. to prepare a few dozen Northern dishes for weekend festivals in Thai town. She almost always sold out. Late last year she went pro, opening her own spot and garnering enthusiastic mentions in local Thai weeklies. Kanyawong hails from Mae Chan, a quaint hillside town in Northern Thailand halfway between Chiang Rai and the Burmese border (it so happens Night + Market chef Kris Yenbamroong’s maternal family lives there, too). It was in Mae Chan that Kanyawong learned to cook, at first helping out at her family’s food stall, then cooking for her parents as they grew older and relocated to the States.

The cooking of Northern Thailand—what Thai people often refer to as Lanna food—is a universe unto itself. Coconut milk and limes are scarce. Earthy spices and pungent herbs take center stage. Sticky rice is the starch of choice. The region’s vast array of fragrant and complex curries probably warrants its own doctoral thesis (for now, go read Austin Bush’s stellar book The Food of Northern Thailand). Rich in rustic traditions and filtered through centuries of conquest and culture, it is, undoubtedly, a cuisine of unlimited fascinations. The most exciting part: Northern Thai Food Club supplies that opportunity better than any place outside of the mother country.

You might as well start with nam ngiaw, a smoky tomato-slicked pork rib stew thickened with cubes of pork blood and ladled over a tangle of fermented rice noodles. It’s the shop’s flagship dish and one of the few items available every day. Straight out of a Chiang Rai market stall, Kanyawong garnishes her version with a fistful of crispy shallots, raw herbs, pickled greens, and, in a nifty regional touch, a spindly dried cotton flower. Her take on Chiang Mai’s beloved curry egg noodle soup khao soi is probably the best in town, too, deeply spiced and lush with coconut milk, a single braised chicken leg bobbing in its saffron-colored broth (it does indeed nudge out the fine example served at Spicy BBQ a short drive away, which, along with Pailin Thai, might now be relegated to the second- and third-best Northern Thai restaurants in America).

The first time I sampled Kanyawong’s gaeng hanglay, a sweetish Burmese-influenced curry stocked with jiggly slabs of pork belly, peanuts, and raw ginger, I almost slipped out of my chair. It was like seeing new colors. In the five or six times I’ve visited, there always seems to be a new curry filling the steam trays, from gaeng om nua—a beefy stir-fried number with braised tendon and an electrifying amount of sliced lemongrass and lime leaves—to gaeng pak plang, a wildly herbaceous soup kitted out with nubs of pork and squishy-tender Malabar spinach. Each curry is scooped into a plastic pint container for around $7, an absolute giveaway. Occasionally regulars show up with giant Tupperware sets to carry away family-sized portions.

It’s not just curry that sets Northern Thai Food Club apart. Behind the steam table is a fridge stacked with containers of nam prik, fiery mortar-mashed relishes that are as crucial to a Northern meal as ranch and ketchup are to a picky nine-year-old. There’s nam prik noom, made from char-roasted green chiles and an immoderate lashing of fish sauce; nam prik ta daeng, a hellaciously spicy dip laced with fruity tamarind pulp; and nam prik ong, a chunky pork and tomato ragú that resembles a spicy Bolognese that spent a semester abroad. You scoop up bites of nam prik with balls of sticky rice or steamed and raw vegetables—cabbage, cucumber, long beans, yu choy stems if they’re in season—a beautiful crunchy contrast to whatever curry you’re nursing.

There’s also a stir-fried version of larb lanna, a Northern iteration of the minced pork salad that forgoes lime and toasted rice powder in favor of earthy spices like cardamom and coriander and iron-y bits of offal; the finished dish comes showered in fried garlic and crushed pork rinds, a crackling pork-on-pork symphony. If you have the chance to sample Kanyawong’s pounded jackfruit salad, heavily fortified with garlic and shallots, you should certainly order that, unless she also is making green mango salad that day, too, stained black with funky crab paste and served with tender peppery stalks of the herb cha-om. In that case, order both.

Will you find lengthy curls of the famed Northern Thai sausage sai uah? You will, hacked into rough chunks and studded with glorious globules of pork fat and chiles and galangal and a ripe whiff of shrimp paste. Next to the mound of sausage on the steam table you might find whole fried fish, fatty strips of grilled pork neck, Thai-style fried chicken, or tantalizing banana-leaf-wrapped bundles of sour pork and egg called jeen som mok kai. Unless you’re the confused Postmates driver who wandered asking about his vegan pad Thai order, you’re unlikely to leave Northern Thai Food Club in a state of want. 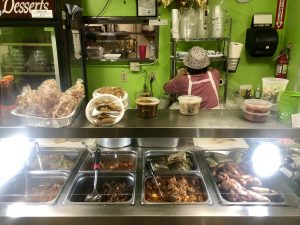 And here’s the thing: most dishes that Kanyawong cooks are not only hard to find in Los Angeles, they’re practically rare outside of Northern Thailand. At one of the shop’s cramped communal tables, I spoke with a Thai woman from Minnesota who said whenever she visits a property she manages in L.A., she will eat nowhere else. The food brings her back to the North, she told me, where she grew up.

Northern Thai Food Club is open seven days a week, from 9 a.m. to 9 p.m. Though she has friends and relatives who help her run the kitchen, Kanyawong is there nearly every day, working long hours as immigrant restaurateurs often do. I once stopped in for a late afternoon snack to find her taking a nap in a minivan parked outside; when she saw me she hopped out and gave me a wave so polite it melted my heart. While I munched on a skewer of deep-fried squid balls she explained that she wanted to start fermenting her own sour sausage soon, and that when fall arrived she would get a shipment of puffball mushrooms from San Jose to make a special salad seasoned with ground pork and shrimp paste. It felt like being a member of a fan club whose membership fee was nominal and whose reward was immediate and bottomless. Obviously I was in the good and capable hands of a specialist, so I ordered another bowl of curry to go.