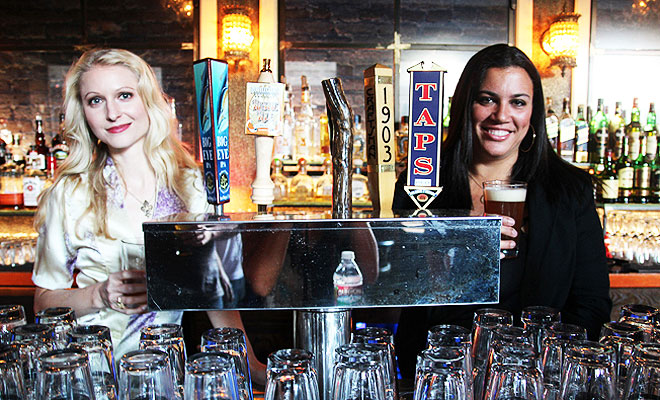 The annual Los Angeles Craft Beer Crawl has been so popular in the past that this year it has been expanded to two days. That’s TWO days to explore more than 100 craft beers at seven different downtown bars. That’s a lot of ground to cover. Thankfully, Hallie Beaune, who along with her Beer Chicks partner Christina Perozzi curated the brews for the crawl, was kind enough to pinpoint for us which six beers are worth making a priority at the crawl—beers that she is personally excited about.

By the way, Beer Chick beer crawl pro tip: Instead of mapping out a route based on the bars, organize your crawl by the beers you want to try. There are a lot of rare and limited beers, but once they’re tapped out, that’s all folks.

If you have a VIP ticket, start out at The Varnish which will be transformed into a tasting room for only rare, limited beers; “whether they’re limited hoppy, barrel-aged or sour beer,” said Beaune. “The limited beers don’t last very long, so one added benefit of a VIP ticket is getting first crack at those.”

Check L.A. Craft Beer Crawl’s Facebook page for which days and times the beers will be tapped. (Note: Saturday’s VIP tickets are already sold out, but there are still some available for Sunday.)

1. The Bruery Or Xata (at Seven Grand): “People have gone crazy for this beer. Ben at The Bruery said that any time they’ve opened it it’s gone super fast. It’s definitely one of the weirdest beers at the fest.” The Bruery’s Horchata-esque blonde ale was brewed with rice, cinnamon and vanilla beans, which starts off tasting like a blonde ale but then transitions to that rich Horchata flavor we all know and love.

2. Strand Brewing Company Cherry Blossom Berliner Weisse (at The Varnish): “I think it’s awesome because I love sessionable, low-ABV beers in the summertime. A lot of times the original Berliner Weisse would be without fruit and you would add a syrup on the side, that’s how it’s traditionally made. But now people are starting to add the fruit that they want in the brewing process.” This interpretation of a classic German beer style is brewed with cherries, giving it a distinctive sweet and tart character.

3. Allagash Brewing Company Avancé (at The Varnish): Full disclosure that Beaune works for Allagash but this strong sour ale is a rare beer that even she hasn’t tried as it’s only available in super limited quantities. “It’s aged with strawberries in Jim Beam bourbon barrels for three years so it combines that bourbon-barrel-aged beer that is popular, which is what the Curieux is, and strawberries. That is pretty crazy-rare. I haven’t even been able to have it on tap.” Beaune says that normally the only way anyone can taste it is at select events. “The only time you’re going to get it is if you go to one of these events and drink it and then you probably won’t have it again.”

4. Coronado Brewing Company Sock Knocker Imperial IPA (at The Varnish): “I’m excited about this one because I was able to drink it up north at the Silicon Beer Valley Fest. It’s got that really nice clean character with a lot of tropical notes.” This beer was just released last month.

5. Goose Island Beer Company Bourbon County Coffee Stout (at Golden Gopher): This Russian Imperial Stout, which was aged in Heaven Hill Distillery bourbon barrels and brewed with Intelligentsia coffee, has a 100 rating on Beer Advocate and is difficult to get a hold of, not just for buying but for tapping at events. “People have tasted it and gone crazy for it so it has this cult following now. I haven’t had it but I’ve heard a lot about it on the street, you know like Beer Nerd Street.”

6. Eagle Rock Brewery Imperialist Double IPA (at Seven Grand): “This limited release Double IPA is a little bit different than the tropical notes in the Sock Knocker. It has citrus and a grassy quality, which is more like that traditional bitter beer. We have a lot of hopheads running around and this Double IPA will appeal to them. It’s a 10 percent beer so it’s pretty strong but it’s a nice one if you want a smack-yourself-in-the-face kind of beer.”