Home Uncategorized The Beef Roll: an International “Pancake” NOT Available at IHOP 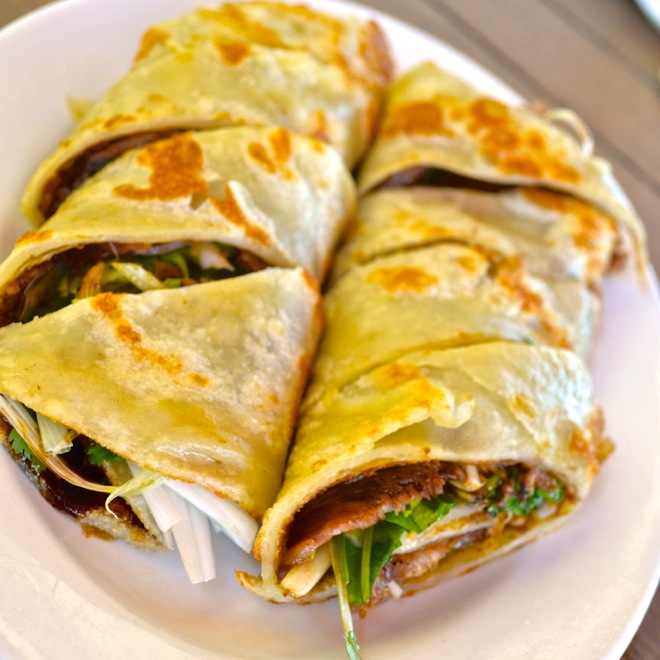 IHOP is supposed to be the International House of Pancakes, however, its menu is somehow missing the hometown pancake of eastern China’s Shandong Province: the beef roll.

To be fair, the beef roll looks more like a burrito, but when it’s sliced up for plating, it resembles those hand-held pinwheels you might see on a deli sandwich platter. But surrounding the thinly sliced braised beef is a circular, fried, flatbread made from a batter that’s sometimes speckled with chopped green onion bits, which is what technically makes this cylindrical beef roll a Chinese pancake.

And while IHOP may not in fact serve international pancakes, their name certainly wouldn’t mislead an unknowing diner so much as Michelle’s Pancake House in San Gabriel and Industry, which does make Chinese beef rolls, but does not flip fluffy, buttermilk pancakes on its griddle. Confusing? Yeah, and it gets even more baffling. Michelle’s Pancake House also has several “pancake” items (as listed on the menu) that can pass for fried dumplings or even biscuits. Some are filled with pork and leeks, while others have a red bean stuffing, but all are made with the same “pancake” batter.

The beef roll is the house specialty at Michelle’s Pancake House, although it’s not quite as hefty as the one served at many a beef roll fans’ fave: 101 Noodle Express in Alhambra. Still, Michelle’s beef roll satisfies with flavorful, tender meat that’s not too salty, while jazzing things up with a balanced portion of chopped cilantro and green onion. The “pancake” here is light and flaky, while still chewy enough to achieve a satiating springiness. It’s made plain—that is, without green onion—and best of all, it’s not seeping oil like some poorly cooked pancakes found elsewhere. A tianmianjiang (sweet flour paste) literally sweetens the deal, bringing a nice contrast to an otherwise savory profile.

IHOP might have buttermilk pancakes and the Rooty Tooty Fresh ‘N Fruity, but for something truly international—or at least sweet ‘n savory—Michelle’s Pancake House is the house to visit.