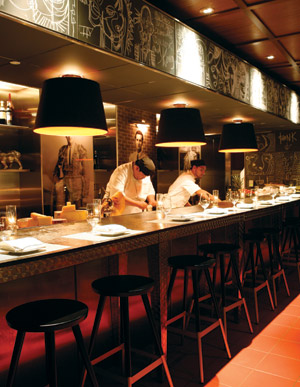 Up to now, at least, the times have been good to Sam Nazarian. After opening his first club half a decade ago, the 33-year-old has followed through on his vow to become the king of L.A. nightlife. The Abbey, Hyde, Foxtail, Katsuya—he owns them all. Nazarian has a simple approach: He hires people at the top of their field and funds them fabulously. Seasoned club promoter Brent Bolthouse is the operations guy. Philippe Starck is the house designer. As a team they’ve created some of the sceniest establishments in the city.

Nazarian’s track record has allowed him to turn the whole celebrity-chef business on its ear. Treating them as geniuses is out. He’s the producer, and they are the talent, a practical arrangement that nevertheless can leave a chef having to compete with the environment. XIV, the restaurant Nazarian launched several months ago with San Francisco chef Michael Mina, stands at Sunset and Crescent Heights, maybe the city’s noisiest corner. Given the hectic urban landscape outside, an interior that resembles a château library, complete with wood paneling and artfully arranged books, seems arch. Upon entering, one is studied—not by the staff but by fellow diners—as if through a lorgnette. Mina makes a valiant effort to keep things from getting too Versailles by loosening up his famously exacting style. His vegetable menu, the most ambitious in Los Angeles, showcases dishes such as turnip tartare with charred broccolini, and grilled chanterelles with balsamic reduction, and draws something essential out of each ingredient. But how can a bijou-scale rendering of turnip tartare compete with a scene that recalls the days of Louis Quatorze?

I expected to find myself with similar misgivings when I visited the Bazaar, Nazarian’s newest restaurant, where he has entered into partnership with Spanish chef José Andrés. This venture occupies much of the ground floor of SLS, the boutique hotel Nazarian recently debuted at La Cienega and San Vicente. SLS has the usual red-carpet touches—a corporate flag waving, a burnished black Escalade docked and ready to ferry hotel guests, a phalanx of men with earpieces forming a welcome committee at the foot of the stairs—but once you step inside, it is a different world.

The truth, however, is that the Bazaar is full of intriguing possibilities. Andrés’s cooking has a theatrical quality that works well with the off-kilter interior. Originally from northern Spain, he made his reputation in D.C. with his restaurants Café Atlántico and Jaleo. His effervescent personality, more likely encountered on TV than in any of his restaurants, matches the pitch at which the Bazaar is set. The twin dining areas are designed so Andrés can display his bifurcated style: traditional tapas in one section, more experimental dishes in the other. Though you can order from either menu no matter where you’re seated, the notion that the space is laid out according to the type of food delivers a clear message: This is a chef who is showman and purist at the same time.

Andrés trained under Ferran Adrià, whose restaurant El Bulli, on the Catalan coast, is legendary for its devotion to a genre of cooking called molecular gastronomy. Adrià’s philosophy is that cooking techniques must welcome experimentation. The rising of puff pastry and the clarification of consommé were arrived at through technical exploration and curiosity. Why stop there? Interesting as the results might be—Adrià became enormously successful by unveiling creations such as noodles fashioned from gelatin and broth—his approach can feel overintellectual. I was born in Spain; I have spent too many glorious moments eating razor clams a la plancha in Madrid, peppers grilled over vine wood in Logroño, and roasted lamb served spitting in earthen casseroles in Segovia to have interest in a molecular interpretation of them. Nor will I ever see the point of serving a niblet of foie gras encased in cotton candy—a concoction that is more the result of world-weariness than adventurousness. Still, I was curious to see whether Andrés, the most celebrated Spanish chef working in this country, could combine both the forcefulness of traditional cooking and the avant-garde molecular style.

The Blanca room’s “modern tapas” menu has a curious thrust. The closer it gets to Spain, the more disappointing it becomes. So while Ottoman carrot fritters with pistachio sauce are plump marvels that seem to limn the eastern Mediterranean, the ajo blanco soup, which should be a flavor bomb of pounded garlic and almonds, is a trembling, milquetoast gelée. Andrés makes a potent cauliflower couscous that is heady with harissa broth, lemon, and fried quinoa. But the tortilla de patatas “new way” overhauls the classic potato omelette unnecessarily; it is delivered not on the customary toothpick but in a foamy glass and looks like what happens when you can’t keep your tortilla de patatas down. Even the humble olive is not safe. Andrés must reconceive it as a capsule that dissolves in the mouth and tastes of olive oil and brine. Big deal. The waiter spoons these out so ceremoniously, it’s as if one were supposed not only to eat them but to applaud.

Far more successful is the Rojo menu, in which Andrés uses quotidian standards as a point of departure. Among my favorites is a slyly subtle escabèche of marinated mussels brightened by an emulsified vinaigrette. Presented in an open tin—as if just pulled down from a shelf instead of being meticulously put together by a chef—the presentation winks at Spain’s history of canning. Croquetas are the journeymen of the tapas world, devoid of glamour, cheap enough for the barkeep to stand you a portion as a friend of the house. In contrast to the oil-saturated dough plugs that get slapped together at taverns, the ones at the Bazaar are phenomenal, sprightly bundles of chicken bound with béchamel and quickly fried. Ensaladilla Rusa, too often a mix of cooked, diced vegetables in congealed mayonnaise, is in Andrés’s rendering something else altogether. The mayonnaise is enticingly airy yet still able to support potato cubes, peas, and ventresca (oil-packed tuna belly). An update, yes, but this one respects the model it is trying to improve. The shrimp with garlic may be less emphatic than the seared gambas al ajillo found in a good Spanish bar, but the Rojo menu has a certainty to it that makes the restaurant special. Two particular dishes have stayed with me for their ability to convey the essential modesty of the Spanish table. The first is a bowl of tiny fingerling potatoes baked in salt and served with a mojo verde redolent of herbs, an unassuming yet powerful dish that has transported me to the coastal village in Galicia, where I spent childhood summers. We’d buy provisions from the village grocer, whose doorway offered Franco’s Guardia Civil a vantage point from which to keep an eye on the central square. An old woman of a type who used to exist in Spain, mourning relatives by dressing in black their entire adult lives, would bring us new potatoes from her plot of land out on the cape. We’d eat them with grilled sardines. The second preparation is pa amb tomàquet, the Catalan specialty of bread layered with tomatoes and splashed with olive oil. It is executed so well here, is so uninsistent and yet so firmly grasped, that it serves as a window into Andrés’s soul.

Toward the end of a meal at the Bazaar, you are led, space permitting, to a subsection of the vast floor plan, a fun house paddock of sorts, where desserts are served. Its low stools, high tables, and pink faux-fur throne emit a quirky playfulness, as if one had traveled down a chute to get there. Andrés’s cutting-edge side doesn’t impress here, either. The floating island, frozen via liquid nitrogen, is as uninspired as it sounds. Some of the choices are excellent, especially the apple bread pudding with saffron sauce. Others, though, could be more polished. (The pineapple and fennel salad, a curious dessert, once arrived without the fennel.) I recommend the flan. It works not because of familiarity but because the smoothness of the custard juxtaposed with the bite of the caramel has an internal logic, a meaning.

That ultimately is the principle that divides the two menus. Although it is formulated as a parley between invention and tradition, it is actually a face-off between those dishes that are conceived and those that are felt. The new stuff isn’t entirely without merit, but whether you call it modern, Blanca, or three ways to Toledo, a foamy tortilla de patatas is never going to take anyone where the codfish fritters with alioli will. I admire Andrés for serving a tapa as austere as those wrinkled, salt-baked potatoes. But I also admire Nazarian for providing him the latitude to explore a culture’s cooking, for not simply telling the chef, “Give them some paella and get them to buy another cocktail.” I didn’t think he had it in him.