Home Uncategorized The 12 Things You Need to Know About POT, Roy Choi’s Newest... 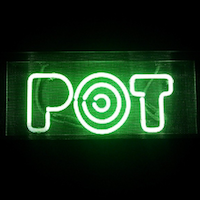 Yesterday, as friends and family gathered to have (a hosted) lunch at POT inside Koreatown’s newest hotel, chef Roy Choi danced his way around the room to sample the broths at each table, pose for photos with hotel guests and fans, and talk about how excited he was to be making the food he grew up eating.

POT is a long way from Kogi, A-Frame, or Sunny Spot. It’s traditional Korean food to which Choi says he’s adding his “own spin.” It’s hot pot gone hip hop, and it’s certainly worth a taste. All you really need to know is that POT opens to the public next Tuesday, March 24, but here are 12 other things to keep in mind until you can get a seat at Choi’s newest spot.

1. Hot pots are the main attraction here, but don’t disregard the other items and also the other-other section—all listed inside a newspaper-like menu that’s full of references to sex and weed and other fun things.

2. The house water? It’s an iced tea-like beverage that tastes like popcorn.

3. The server outfits are comprised of so many different (but fun) patterns that, especially after a drink or two, you might get dizzy looking at them.

4. The tables are equipped with induction hot plates, but there are no buttons to call servers over.

6. There’s a salad on the menu called Kush. The dish of steamed dumplings is called Kat Man Doo.

7. There are two low bars, situated in front of glass barriers behind which prep cooks work. They don’t serve drinks behind these bars; drinks come from POT bar.

8. Behind the back bar, a DJ will be spinning most nights next to the prep guys.

9. The host that’s wearing a gold necklace that says ‘Boss’ is not really the boss.

10. After your meal you may be treated to a complimentary Ritz caramel bar. Eat it, no matter how full you are.

11. The cafe sells, among other things, army cakes and Hello Kitty cakes by the sheet or slice. All of the pastries at the cafe are made in-house.

12. POT will not take reservations. When it opens next week, it will serve from 11 a.m until 11 p.m. daily. If there’s a line to get in, don’t forget that you can wait for your table at the bar outside.