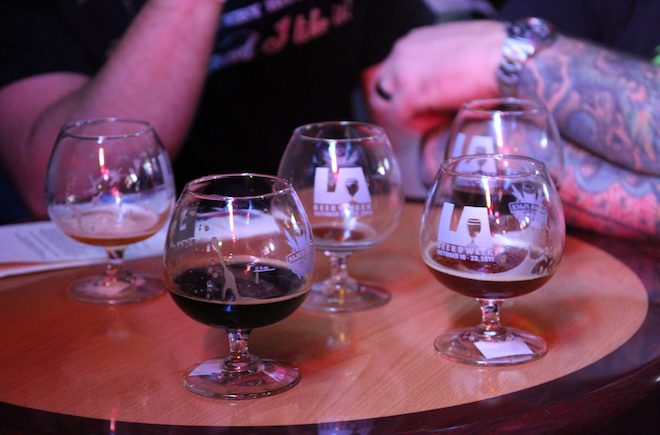 With local breweries springing up across L.A. and a craft beer bar in every neighborhood, it’s easy to see how L.A.’s craft beer scene has blown up in the past few years. There’s perhaps no better evidence of this than the growth of L.A. Beer Week, the city’s largest brew fest.

This year’s celebration of suds takes place from September 19-29 with events across the city. In addition to the big L.A. Beer Week Opening Gala at Union Station this upcoming Sunday, here are some events that we think you just can’t miss. (A full listing of events can be found on the L.A. Beer Week calendar.)

Lance Rice is a 55-year-old beer historian with autism. He’s chasing his dream, embarking on a journey to visit breweries across the U.S. as part of a book/documentary project that is inspiring beyond belief. Meet him and learn more about his fascinating story at all three of his events next week. There’s one each at LAB Brewing Company, iO West Theater, and Golden Road Brewing. (More information.)

Yup. It’s exactly what it sounds like, and it should be an embarrassingly good time for one and all. Brewers and brewery staff from Eagle Rock Brewery, The Bruery, Stone Brewing Co., Golden Road Brewing, Kinetic Brewing, Noble Ale Works, Lagunitas, and others will be singing their hearts out and it might just get hilarious. (More information.)

Not exactly L.A,, but we gotta show some love to our O.C. neighbors, especially when they throw a bash such as this! There will be dozens of food trucks, live music and over 80 craft beers on tap. For those looking to trim off some of the damage your waistline will undoubtedly see, there’s a quick little 5k to get your blood flowing. (More information.)

Eagle Rock Brewery is once again making Unity, the official beer of LA Beer Week, spiking it with honey this year. And if you’re curious as to how it’s made, they’re opening their doors to interested homebrewers and showing exactly how it’s done. (Tickets and more information.)

Eagle Rock Brewery hosts its annual Brewers Brunch, with some local industry folk hangin’ out, drinkin’, and grubbin’ on Lemon Poppy Kitchen food. A portion of proceeds will go to the L.A. Brewers Guild. (More information.)

Boneyard Bistro’s Beer and Whiskey Brunch features six courses, each of which is paired with a beer from Firestone Walker, Ballast Point, or Deschutes. And for an added boozy bonus, three of the courses ALSO have a whiskey pairing. Taxi! (Tickets and more information.)

Decisions, decisions? Nope! You can go to both! Eagle Rock’s event goes until 1 p.m., which is exactly when Boneyard Bistro’s starts.