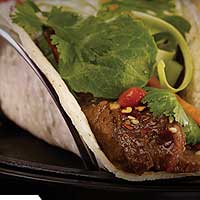 Well, Roy Choi, you’ve really done it. T.G.I. Friday’s has announced that among its 17 new menu items will be a platter of “Korean Steak Tacos.”

Straight from the TGI Friday’s menu:

Ok, it’s not exactly Kogi. And what? Did market research prove that Middle America is frightened by the word kimchi? Still, you can’t help but appreciate how quickly something goes from a cult fusion food truck to the menu of America’s heartland.