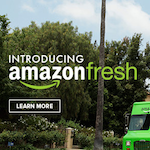 Last week, Amazon.com announced that it was launching Amazon Fresh, its grocery delivery service, in Los Angeles. This was a bold move, even for a company that dominates the e-commerce sphere. Previously, Amazon Fresh was only available in Seattle—a city that is less than a fourth the size of L.A. Grocery delivery is itself not new to SoCal. Webvan fulfilled many grocery delivers in the city until it went bankrupt in 2001. But aside from Pink Dot and limited delivery options from Vons, this is L.A.’s first experience with mass market, full scale grocery delivery.

Just for the sake of comparison, New York City has had Fresh Direct and a number of other similar services at its disposal for nearly a decade. New Yorkers love grocery delivery; Fresh Direct boxes are as ubiquitous on sidewalks as taxis are on the street. But New York’s relatively small geographical footprint makes it ideal for such services. By contrast, L.A.’s breadth and—let’s face it—rush hour traffic make a service like Amazon Fresh both highly desirable (for the consumer) and logistically challenging (for the business).

➽ Our Los Angeles magazine staffer (LAMS) signed into Amazon.com at work. (“I can never remember my password.”)

➽ The terms and conditions include a clause about how the service is free for 90 days. After the grace period, the user’s credit card is charged a $299 annual fee for the service. (“Three hundred bucks a year? I’m not sure how I feel about that.”)

➽ LAMS pulled up a grocery list that was drafted earlier. (“Look at this, I can just copy and paste my list into the search bar.”) The system is set up identically to Amazon.com, except (in most cases) the search results are groceries. There are star ratings and reviews for each product as well.

➽ Of course, this being California, we had to buy avocados. (“I like that you can pick ripe avocados or unripe ones.”)

➽ The milk section is daunting. There are nearly three pages of milk, from every brand and in every fat percentage. Organic is mixed in with non-organic, and there are boxes and jugs of all sizes. It’s probably the same selection as what you might find at a Whole Foods or Bristol Farms, but it’s not as organized. Brands are not grouped together. (“And how do I know what the expiration date is?”)

➽ On the list was “a loaf of good, crusty bread.” For this, we went to the Amazon Fresh locals page, which offers selections from local vendors like Heirloom L.A. (you can buy lasagna cupcakes on Amazon!), The Cheese Store of Beverly Hills, and La Brea Bakery. Bingo, crusty bread. Except: “Oh, look, it’s all take and bake…”

➽ Wine was next on the list. Yes, you can buy alcohol on Amazon Fresh. Except, wine and beer is supplied by The Wine House and seems to require an extra delivery day. (“This is going to hold up my order? I’ll pick it up on the way home instead.”)

➽ A search for kale led to some interesting discoveries. Not only did a bunch of Lacinato (Dinosaur) Kale show up, but so did kale chips (understandable), Happy Tots Greek Yogurt Kale, Spinach & Apple, a CD called Breathing Under Water, and, even more oddly, the book A Very Virginia Christmas.

➽ Meat is available from national distributors as well as local butcher Huntington Meats. Fish is available frozen. And other frozen items like ice cream and popsicles are also available on Amazon.com. (“How will they get the frozen stuff to arrive frozen? Liquid nitrogen would be too expensive…”)

➽ A general search for fruit yielded a hundred pages of results. After page two, it was clear that Amazon was not limiting search results to food. Fruit of the Loom underwear showed up on page six. This, despite the fact that Amazon.com and Amazon Fresh ship from different warehouses.

➽ Time to check out. The bill came out to just over $160, which seemed about right considering the variety and amount of food ordered. (“Wow, it’s a good thing I have a job.”)

➽ Since we were ordering around 5 p.m. on a weekday, Amazon Fresh said the soonest the order could be delivered was by 3 p.m. the following day. Not too bad. Still, our LAMS would still be at work at that time. (“I’m going to schedule it to arrive at 7 p.m. tomorrow, when I’m home.”) You can also pick between having Amazon Fresh leave it by your door or having them deliver it to you in person, when you’re home. (“I want to meet these guys.”)

➽ Payment processing is identical to the Amazon.com system.

➽ Fast forward to the next day. “I asked them to show up between 7 and 8 and they arrived at 7:40 on the dot.” Two drivers pulled a bright green van over to the curb and came out with eight green bag-boxes. (“Oddly—it was confusing at first—there were another two guys filming or photographing the whole thing. Apparently it was their first week doing deliveries and they were documenting everything.”)

➽ The delivery guys introduced themselves and asked if they should bring the groceries inside. (“We opted for them to leave them at the door.”)

➽ Inside the bags, frozen water bottles were used to keep cold items cold. (“So, we got 15 free bottles of Dasani water with our order. The popsicles arrived on dry ice; they weren’t melted at all.”)

➽ All of the produce arrived in perfect condition. (“The strawberries weren’t mushy, the greens were fresh and crunchy, and the cherries were ripe, but not soft.”)

Further notes from our LAMag staffer:

○ “This saved me a lot of time: driving to the store, parking, walking around the store. Saved me at least an hour. Plus, I didn’t have to pay for gas.”

○ “I like that there are recommendations. It made me want to try new things, things I might not normally pick up at the store.”

○ “On the other hand, I’m an impluse buyer, so those potato chips I would have passed by and plunked into my cart at Whole Foods didn’t make it into my Amazon Fresh cart because I would have had to search for them. I don’t know if that’s a good thing or a bad thing.”

○ “I will certainly use the service again, within my 90 day free trial. I’m not sure the $299 annual fee is worth it yet. It’s a matter of figuring out if my time shopping and the cost of gas is worth the three hundred dollars a year.”