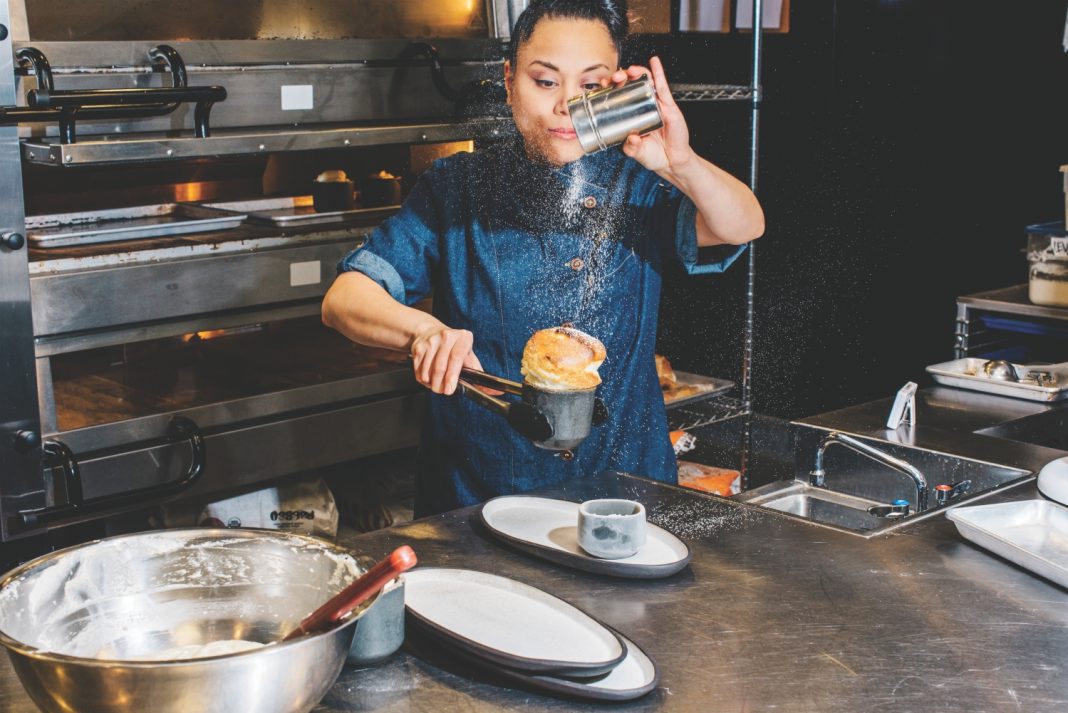 There’s a reason so few restaurants serve soufflé. According to chef Sally Camacho Mueller, it’s not that the dessert is tricky to prepare—though her version does require pouring molten sugar from a hot pan with one hand while holding a blowtorch in the other—it’s that the iconic French treat is, to be frank, a pain in the ass to serve.

At Tesse, the glammed-up French bistro on the Sunset Strip where Camacho Mueller is both executive pastry chef and partner, it takes approximately ten seconds for the soufflé to travel from the deck oven to your table. “Ideally it would be five seconds,” Camacho Mueller deadpans. Any longer and the ebullient dome—a precarious construction made possible by egg whites, heat, and the laws of physics—begins to deflate like a leaky balloon.

When Camacho Mueller opened Tesse with chef Raphael Francois last year, the restaurant’s signature soufflé was bright purple and flavored with the purple yam known as ube, a nod to her Filipino roots, but it was a tough sell in this pocket of L.A., so she swapped the yam for vanilla beans from Madagascar. Now she makes a chocolate version, too, which is so beloved that she received a handwritten note from a customer thanking her for taking the time to properly fold the molten chocolate into the batter and for “maintaining the integrity” of her desserts.

Camacho Mueller’s obsession with baking started early. As a child she borrowed VHS tapes of cooking shows from the library and took notes while studying Julia Child on PBS. At the age of ten she cooked her family a four-course meal that included shrimp mousse molded in the shape of a fish and topped with poached zucchini coins meant to resemble scales. (“It was horrible,” she remembers. “So flat!”)

Fresh out of culinary school (where she graduated with honors) Camacho Mueller followed a career path that rarely gets talked about in today’s celeb-chef-obsessed food culture: She went to work at hotels. There was no small-batch this or that—she was tasked with the art of feeding 8,000 people a day, overseeing everything from bread and viennoiserie to chocolate work and wedding cakes.

During a stint at the Four Seasons in Beverly Hills, she took an interest in professional pastry competitions, which led her to join the first all-female team to compete on the national stage. These days—when not teaching pastry classes or practicing the perfect crémeux for a competition—you’ll find Camacho Mueller reinterpreting elegant and traditional European desserts at Tesse, where she might serve an intricate Mont Blanc made with pureed chestnuts or a lighter-than-air fraisier cake with pastry cream and strawberry gelée.

But as a native Angelena, she isn’t above taking inspiration from her childhood trips to Magic Mountain: The accompaniment for the soufflé at Tesse is a small mound of glacé point, or what you and I might best describe as a bowl of homemade Dippin’ Dots. When the showstopping dessert lands on your table, you will inevitably be tempted to snap a beauty shot. All Camacho Mueller asks, however, is that you wait until after the last spoonful to post that Instagram pic. This is a dessert meant to be eaten in its prime.

Pastry Chefs Give Us the Skinny on L.A.’s Most Creative Desserts