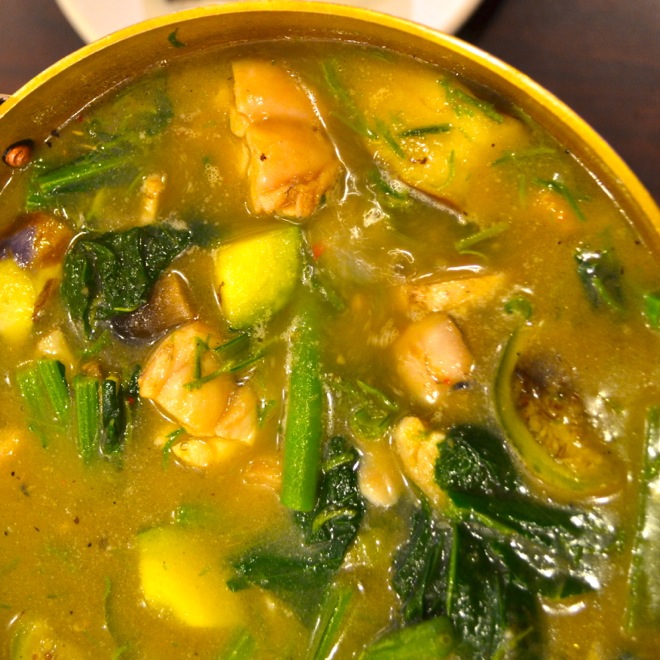 Strolling into Lum-Ka-Naad Thai Restaurant in Northridge just after the chef has added the final unit of capsaicin on a particularly Scoville-filled pan-fry like their kuah gling plate—a meat dish seasoned with dried curry, Thai chiles and other spices—is only a bit like venturing into a Wal-Mart at the crack of Black Friday and getting blasted by pepper spray from a shopping zealot trying to score the last Xbox in the electronics department. Because the kitchen is located next to the front door, the entrance hangs heavy with pepper infused air. In fact, the entire “Specialty Southern Cuisine” portion of the menu has been labeled as “‘too spicy’ for many Americans” by management.

Having experienced enough third-degree burns on my taste buds to outlast the zombie apocalypse, I opted for a gentler meal where Sgt. Pepper wouldn’t be commandeering my mouth. Although there aren’t many non-spicy items here, there are a few that can have the heat adjusted to “American” tolerance levels. (Wuss.)

Lum-Ka-Naad prides itself on serving authentic Thai food and, when possible, pointing out from which region a specific dish originates. Some of their specialties include sai oua (northern Thai sausage) or kang toon, a soup brimming with taro leaves that resemble floppy elephant ears.

But the most interesting item on the menu in my mind appeared to be kang kae with frog legs. This is a viscous soup incorporating sticky rice that has been roasted then blended to act as a thickening agent for the soup. Cloudy and algae green, this is a broth you can almost taste with your eyes alone. It’s profound, with earthy flavors of minerals and chlorophyll extracted from the spinach, green beans, and cucumber slices. The soup’s adjustable heat comes courtesy of a Northern Thai green chile paste with fish sauce called nam prik num.

Purple and Thai eggplants adorn the soup: the former sliced to thirstily soak up the broth, while the Thai variety appears more like dwarf watermelons, as crisp and fresh as cucumbers even when cooked. Straw and button mushrooms add a fungal dimension while pickled yellow peppers add a tangy touch.

The frog legs fit right in to this murky soup that visually reminded me of a pond somewhat. Although a tad(pole) too chewy, the fishy frog meat harmonized well with the soup, putting forth the richness of a fish consommé that grows richer as the it’s consumed.

Walking into this Thai restaurant, where it seemed that scorching heat was the main attraction—no complaints there—finding Lum-Ka-Naad’s kang kae was a pleasant surprise. It’s never overpowering nor heavy handed, and every component of the boggy stew eventually surfaces with its distinct characteristics to really make this dish shine.