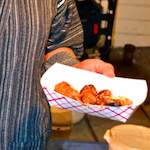 This past Saturday night was the final Chinatown Summer Nights outdoor festival for the year. I’ve been the host of the event’s culinary stage for four years and have seen Chinatown change and evolve dramatically in that time, from the new Jia apartments at the gates of Chinatown to Chego! and Starry Kitchen’s relocation to the legendary neighborhood. There’s even a new Bruce Lee statue frozen in a Jeet Kune Do position off Central Plaza.

The latest addition of a temporary night market is a strong testament to the public’s ever increasing appetite for food, especially street food in an Asian night market setting.

Bamboo Lane, an alley tucked just north of Central Plaza, was this summer transformed into a mini night market. There was a bevy of steamed and fried Chinese traditional bites, from Hop Woo’s pillowy Shanghai pancakes to Golden Dragon’s succulent shui mai.

Takken was a fusion Japanese food pop-up stall that really got my attention, first with the aroma of freshly grilled meat, and next with its selection of robata skewers.

Soy glazed chicken thighs were succulent, bursting with smoky, sweet flavors with every juicy bite. The neat stacks of lanced pork belly were simple yet irresistible — the influence of the hardwood coals permeating each piece of pork. Caramelized fat and browned meat teamed up to make the pork belly skewer a must eat on Bamboo Alley.

One of Takken’s fusion specialties, lemongrass pork meatballs, was probably the best orb of meat I’ve put in my mouth in some time. Moist, springy, and concentrated with pork flavor while accented by lemongrass and other seasonings, I couldn’t get enough of this savory skewer.

With summer coming quickly to a close, Takken’s robata grilled meats are delicious ways to extend the flavors of the season one skewer at a time.