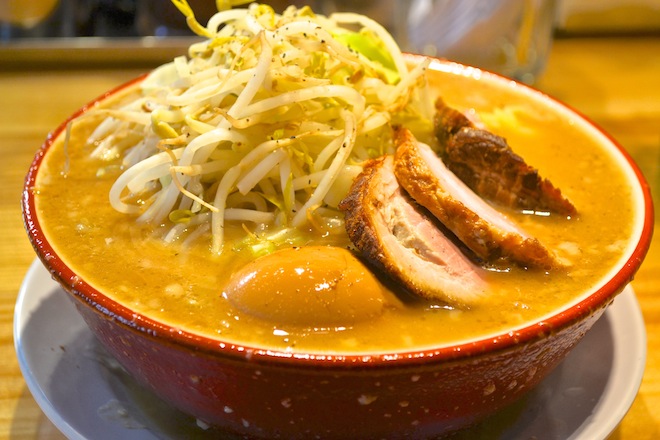 60 hours. It’s more than the average Joe or Josephine spends at work each week. A commercial jet can circumnavigate the globe in less time. Plant soybeans and they’ll sprout in roughly 60 hours.

So, what happens when pork bone broth is simmered for 60 hours at Tsujita LA Artisan Noodle’s new ANNEX? Pure porky pleasure, that’s what.

When pork bone is relentlessly siphoned of its flavor, marrow, texture, its every fiber and molecule, a broth that straddles the border between soup and cream results. Globules of gummy fat float atop a murky, tan, tonkotsu lagoon and a film forms on top. It is beyond luscious.

The flavorful film along with the sticky soup cling onto buffed up strands of ramen― custom made by Sun Noodle in Compton―that resemble udon in girth but still possess the soul of ramen. This is heavy noodling in the most literal sense.

No doubt, ramen purists will grumble about the ANNEX’s extra bulky noodles and, maybe, even the unctuousness of the broth. But the truth is that these two primary components of the tonkotsu ramen are ideally matched. The dense, wheat noodle is the only dance partner that can keep up with a broth so saturated with flavor, you can actually taste the dissolved bone, and so thick in texture, your tongue will be coated in fat.

Three slices of char siu pork belly sponge up the soup while waiting to be eaten. The fat on the pork disintegrates as soon as it hits your mouth, while the rest of the meat takes minimal chewing to masticate. Ajitsuke tamago or seasoned egg has a satiating, runny yolk that adds to the creaminess of the gluttonous bowl.

Tsujita ANNEX’s tonkotsu ramen does not know the meaning of subtle, which is exactly how I like my ramen.