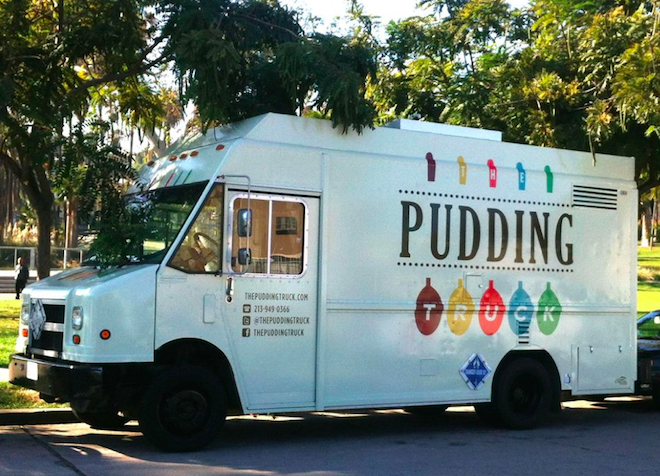 Photograph courtesy of The Pudding Truck

Taste Pappy Van Winkle at The Blind Donkey — 1/30
The world’s rarest and most sought after bourbon has arrived in Pasadena. The Blind Donkey will serve 1-ounce shots of their shipment of Pappy Van Winkle (10, 15, 20, and 23 year). Other rare spirits will also be on offer, including Eagle Rare 17 Year, George T. Stagg, Thomas Handy Sazerac Rye, and Stagg Jr. More information.

La Brea Bakery Re-Opens, Celebrates 25 Years — 1/30
An L.A. icon, La Brea Bakery went under the bread knife last year. It reemerges this month just in time for its 25th Anniversary. Celebrate the shop’s new look and location (a few blocks north—still on La Brea) with Nancy Silverton herself. Samples and a ribbon cutting are the icing on the cake. More information.

The Pudding Truck Launches at Golden Road Brewery — 1/31
Just when you thought there was a food truck for everything, The Pudding Truck rolls up. Taste free samples of stove-top pudding in flavors like butterscotch, vanilla bean, and vegan chocolate hazelnut when L.A.’s newest dessert truck hits Golden Road Brewery’s beer garden from 7 until 10 p.m. Samples are free; pints are available for purchase. More information.