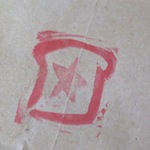 If you haven’t already, you should meet Rose and David Lawrence. They can be found most Wednesdays at the Santa Monica Farmers’ Market, selling things like beer bread and quince cardamom jam. And when you meet them, you’ll discover that the Lawrences’ combined enthusiasm for and knowledge of: architecture, music, antiques, social justice, history, politics, travel, bread, and the finer points of preserving is both infectious and appetizing. Which has so far worked out well. As of last Saturday, David and Rosie are now the keepers of a small shop and cafe on Washington in Culver City called, perfectly, Red Bread.

Recently, I spent a morning sipping coffee with the duo. We chatted about many things, including these:

How did you two meet?
D: In college, at William and Mary.
R: When we met, I found out that David loved cookies. And so I wanted to make him the perfect cookie, so that he’d stick, you know? So I combined all of the best things, all of the things I loved and all of the things that David loved: whole wheat flour, whole rolled oats, TCHO chocolate, toasted organic California walnuts, raw sugar… You know how most oatmeal cookies are just barely dotted with oats? I wanted an oatmeal chocolate chip cookie that was heavy on the oats.

And so did it work?
D: Well, here we are!
R: It became our best selling product, our cracked cookie. It has very little flour, so it crumbles and cracks and we sell out of hundreds of them each week.

Tell me about Red Bread.
D: We started Red Bread last January, January of 2012, as a way to bring bread back into focus. It has always been a virtual company. Which is sort of how we liked it, because it’s a way to marry the best of the present with the best of the past.

How do you make the bread?
R: We still bake out of a commercial space with deck ovens, but it’s all done by hand, one at a time. All of our flour is from the West Coast. We use beer in a lot of our breads as a leavening and flavoring, and we source that from Southern California—right now, we’re using a red ale made near Fort Bragg—and the last ingredient is water. So it’s really very simple.
D: If were up to us, every bakery would be making sourdough, or artisanal bread.

What do you say when people ask if you have any gluten-free breads?
D: Well, we don’t make gluten-free bread. For a number of reasons: first, the stuff on the shelf is usually made with corn or rice flour, and those simple carbohydrates are not great for the system. But also because when bread is made the way ours is made, the gluten develops the structure of the loaf, but then it dissipates as it’s baked. We aren’t using any commercial yeast, dough stabilizers or enhancers, so there’s very little gluten in the finished product.
R: I like to ask people, mainly people who have a sensitivity to gluten, if they have eaten bread in Europe and if they had any trouble with it. And they always say that European bread gives them no trouble. Which is why they rarely have any trouble with our bread.

What is on the menu at Red Bread on Washington?
D: We want the bread to be a central focus, obviously, but we also have pastries in the morning. And then for lunch we’re making soups and salads and sandwiches. Any place we can put bread, we’ll do it. We want to introduce people back to bread—good bread.
R: We’ll have tea service all day, too, because it’s the only time people really slow down, you know? So, we’re serving Grey Dog Tea which is harvested and blended in Northern California. We’re working on creating our own blend. Also, we’ll have homemade yogurt, which I learned how to make from a friend’s mother, and jarfaits.

What are some of the jams you have on offer now?
R: Our Stawsilberry, so named because we grew up with Willy Wonka, and so why not? Which is a strawberry basil blend. And also we have Peppricot right now, which is apricots with pink peppercorns.  We like to walk the line between sweet and savory.

What else are you making in-house?
R: Pickles, fresh cheese, charcuterie, gravlax… we’re making this bacon too, it’s a maple, chili pepper smoked bacon. And marshmallows. Some swirled with our jam.
D: We’re also going to be selling raw milk, raw cultured butter, and fresh produce.

And so is it just about making everything the old-fashioned way?
R: I think what you have to know about Red Bread is that it started long ago with this idea I had. I would wake up and think: I want a pickle. But I want one without all of these preservatives and things in it. So I started making them myself. But you have to understand why this is what I do now. Ever since I was little, I have been nonstop. I go a million miles a minute and my mom was always saying, ‘slow down Rosie, focus.’ It’s easy to speed through things, but I realized that pickling, that preservation is the only way I slow down. It’s the only thing I’ve found that requires you to spend a set amount of time doing one thing. So that element I was chasing—the ability to pause or slow down—was gifted to me through this process of preserving. When you slow down, so many magical things appear to you…
D: You start to look around and realize that if the human race would just focus on feeding ourselves well, everything would even out and fall into place.

Red Bread is now open Wednesday through Friday from 8 a.m. until 2 p.m. and on Saturday from 10 a.m. until 4 p.m. Parking is available on the street or in the back.