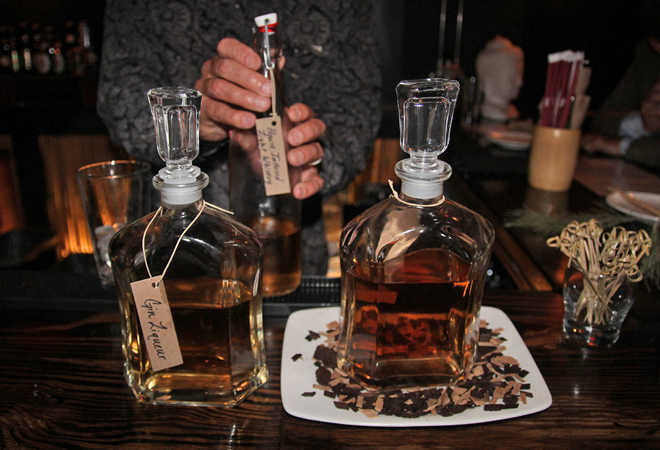 Soju cocktails usually get a bad rap. And with good reason. They’re usually just low-proof drinks a beer/wine-only restaurant threw together in an unimaginative attempt at a cocktail list. But the month-old Buddha’s Lounge, the redone backroom of Buddha’s Belly on Beverly Boulevard, offers up soju’d classic cocktails: a Manhattan, Old Fashioned, Negroni, Gin Martini, and more.

Buddha’s Belly General Manager Brian Cousins (formerly of Playa and the Patina Restaurant Group) convinced the restaurant to turn its little-used event space into a lounge to draw in more customers. It offers something more interesting to patrons who might be tired of Lychee Martinis and sake sangrias.

Using the infusions cocktail trend as a base, Brian created his own “light whiskey” (bourbon), “smoked whiskey” (scotch), and “gin” liquors. “It’s got a little burn at the end. So what’s going on because of the alcohol, you only get 24 percent alcohol, you get the flavor forward and the alcohol kind of lays back there, it doesn’t come at you. If this was a real gin we’d be hit with that burn first,” he said.

To re-create the herbaceousness of gin, he infused soju with juniper and other herbs. To get the smokiness of scotch, he went with leather and wood. For rum, he used brown sugar and molasses, and for corn whiskey, you guessed it: corn. The entire infusion process takes about eight weeks. Except for the potato vodka which infuses the potato for a short amount of time because “that earthy quality of a potato can get a little overwhelming.”

So does it work? The infusions are lighter version of the regular spirits, not just in alcohol but in taste. Think: a drink you left on ice after several long minutes. The flavors won’t fool the booze connoisseur but they offer something more interesting for Buddha’s Belly diners looking to imbibe something other than beer, wine, or sake. “I thought it would be fun to give them that cocktail element,” says Brian.

In addition to the classics, Brian offers up his low-proof versions of Julian Cox’s famous Barbacoa cocktail, Sam Ross’ Penicillin, and a White Russian. Again, these drinks might not satisfy cocktail enthusiasts, but those who have never tasted the originals might get a kick out of a soju cocktail that’s not even the slightest bit syrupy.