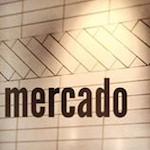 Mercado owner/operator Jesse Gomez (Yxta) and executive chef/partner Jose Acevedo captured our tastebuds last year to win a coveted spot among Los Angeles magazine’s top 10 favorite restaurants of 2012. The critical and commercial success of their restaurant and bar has given rise to a second location, this time kitty-corner from The Original Farmers Market, near Third and Fairfax. Opening tomorrow, Mercado numero dos mimics the original in food and flair, but expands on things like space and comfort.

Architect Ana Henton outfitted the space, which until a few months ago was (a somewhat appropriately named) Faux Pas Bistro. She removed the kitsch and replaced it with edgy elements like a mural by Los Feliz-based artist Carlos Nieto III. Two fireplaces (one in a sub-level) keep things cozy while a garage door opens the dining room out to the street. A bar in the center of the space glows under twinkly lights against a roof that opens up to the sky.

Everything about Mercado on West Third is bigger except the menu. Last October, Patric Kuh remarked on Acevedo’s classical restraint in preparing home-style dishes with a touch of elegance. He wrote of the chef’s food, “He prepares his shrimp enchiladas with yellow mole straight up; there’s no improving on that texture when a tortilla is starting to get nice and juicy beneath a terrific sauce. At other times he adds only a subtle twist, like when he reconfigures Baja-style fish tacos by squeezing an aioli of chile de árbol under the battered flesh…”

Which is all to say: the menu at the new Mercado is exactly the same as it is at the original location, prices and all. The cocktail list, by Mixologo Cesar Arenas features the restaurant’s famous Jamaica margarita as well as La Piña, a pineapple-tequila mix. Arenas says that on opening night he’ll be slinging a kiwi-mezcal creation, tentatively called the Mexican Down Under. Find it written on the mirrors across the east side of the dining room. That’s also where food specials, made from ingredients found at the Santa Monica Farmers’ Market, will be written. A bigger kitchen at the newer Mercado means Acevedo will be serving more specials as the seasons pass. He’s planning on exploring the Hollywood Farmers’s Market as he settles into the neighborhood and is excited to be able to play around in a space that’s more than twice as big as his kitchen on the Westside.

Cocktails Inspired by a Magician Movie Have Arrived in Beverly Grove