Home Food & Drink One of L.A.’s Most Treasured Restaurants is Celebrating its 90th Birthday with... 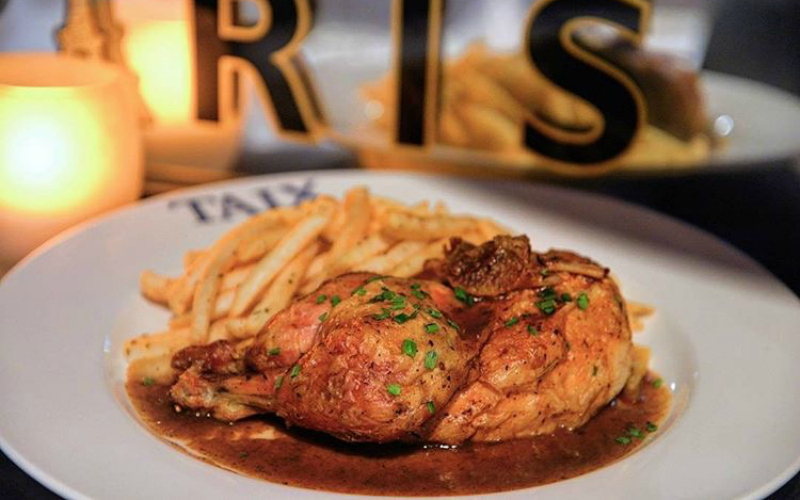 Dining at Taix French Restaurant in Echo Park is already like stepping back in time, but on Sunday, October 8, the prices are going old-school, too. The French countryside-inspired restaurant is celebrating its 90th anniversary by serving its traditional roast chicken dinner for just 90 cents. When the restaurant first opened in 1927, the chicken dinner was a mere 50 cents, but nowadays it’s normally priced at $15.95.

The anniversary special runs from 4 p.m. to 8 p.m., and during that time the menu will be limited to the roast chicken au jus, soupe du jour, and salad. (Soup and salad are an additional 90 cents each.) Reservations will not be accepted, and guests will be seated on a first come, first served basis. Full bar service will be available, because what’s a traditional French meal without a glass of wine?

After 90 years, the restaurant is still owned by the Taix family. The current owner, Michael Taix, has worked with French Chef Laurent Quenioux to fine-tune the menu. “People say they don’t want change, but deep down inside they always appreciate something new that’s still presented in an old-school manner,” Taix said. “Of late, I’ve worked hard to bring back traditional, old country French cuisine—lots of classic game fare such as beef tongue, oxtail, and lamb shanks. In fact, we were one of the first in town to serve short ribs in 1980. I call it ‘imperceptible change,’ where even the most frequent patron wouldn’t notice a difference, but the change is in there just enough to keep them coming back for more.”

Taix is located at 1911 West Sunset Boulevard in Echo Park.

We Are Haunted by the Utter Perfection of This Chicken Sandwich

Drought for Dinner: How Much Water Went into Your Pork Chop?