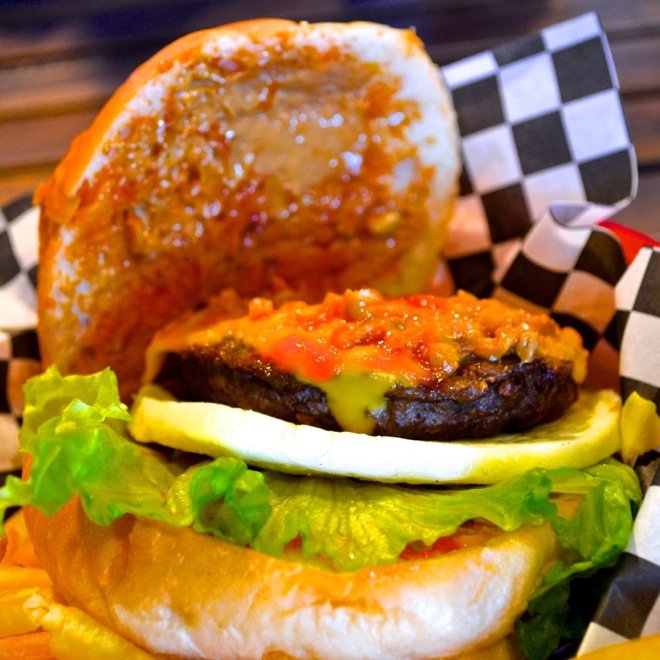 The good ol’ hamburger… it’s a classic. In the same league as baseball, Coca-Cola, and rock n’ roll, this American phenom has traveled the world and been embraced, adopted, and adapted to many a culture and country. Hamburgers are culinary diplomacy at their finest.

Sometimes, though, the adapting part can be pretty interesting, like the time I visited Taiwan and ate at a Burger King. Being the seasoned globetrotter that I am, I was well aware of how American businesses made modifications in order to assimilate with the host country, and Burger King did just that by enthusiastically offering items not available in the U.S. (The thing that ultimately lured me in was their commercials for a 7 Layer BK Burger, massively constructed with seven patties, seven slices of cheese, and seven pieces of bacon.)

The thing about the hamburger being an international sensation is that it eventually came back around. Full circle. Taiwan accepted the burger, owned it, and now has introduced it back to us. Ladies and gentlemen, the Taiwanese burger has landed!

Bun Bun Tea House in Arcadia looks like what might’ve resulted if an In-N-Out Burger and a Lollicup got busy and spawned. This little Taiwanese snack shop is a hybrid of cafe hangout and fast food chain wannabe. Bun Bun dwells in the same shopping center as the wildly popular SinBala Restaurant, and is around the corner from the legendary Din Tai Fung Dumpling House.

You can get just about any type of burger at Bun Bun: veggie, shrimp, fish, pork, even an egg omelet burger. But when in Taiwan or, in my case, Arcadia, you stick with the Taiwanese spicy beef burger. Served on a sesame seed bun, this burger is not your standard 80/20 chuck; the texture is more like a firm meatball, dense and compacted into a patty. Although not particularly juicy because it’s cooked medium, the meat is well seasoned, with subtle hints of Chinese five-spice and chili powder. Melted American cheese and a fried egg elevate this burger further, while jalapeño slices underneath the lettuce cranke up the heat. A heaping side of fries come with the meal, and remind me of the good ones McDonald’s used to make, though less greasy. A sickly sweet, pale yellow, mayo was the dipping sauce, but you’re better off with the ketchup at the front counter.

The wackiest burger on the menu, the peanut butter cheeseburger, is pretty much like the spicy beef burger, subbing the peppery spice with some creamy peanut butter slathered onto the bun. And of course, nothing washes down a peanut butter cheeseburger better than milk. Thankfully, Bun Bun has that covered with the Taiwanese refreshments of choice: milk tea, straight iced milk, and fruit-milk smoothies, with a myriad of jellies, sweet beans, and syrups to bedazzle them.

(Also worth applauding is Bun Bun’s Taiwanese-style fried chicken snack, which I had as the intro to my meal. Its light and crispy crust is reminiscent of tempura, but with nuanced flavors of five-spice powder, pepper, and sugar. The breast meat is exceptionally moist and tender and becomes spectacular when dipped into the sweet hoisin-like sauce. It’s irresistible, and is my new favorite fried chicken in town.)