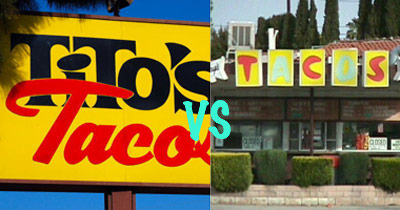 NBC Los Angeles (channel 4) is reviving the heated Tito’s vs. Henry’s taco argument for their new online feature, the Golden Local Debates. As part of their heavy-handed “Locals Only” angle (anyone else find the new ads a little snarky for a news channel?), folks are invited to vote online for their favorite anything and everything L.A. This week, the match-up is tacos. So far, Culver City’s Tito’s is favored 82% over Studio City’s Henry’s at 18%. Beg to differ? Vote here.

(If it was a battle over theme songs, I’m pretty sure Tito’s would have it.)