Home Uncategorized Table for One: Have You Ever Dined Alone? 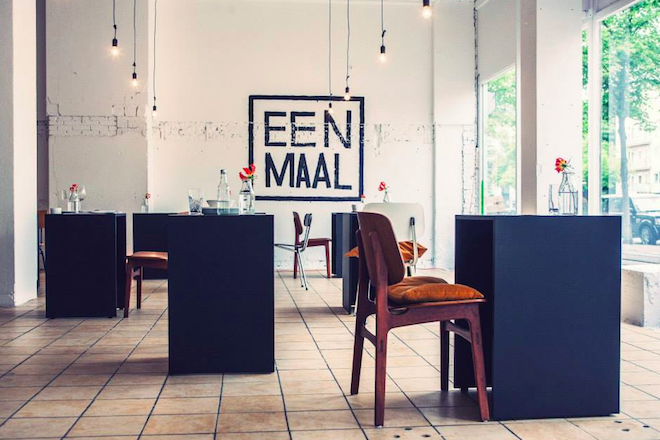 “…sharing food with another human being is an intimate act, which should not be indulged in lightly.” — M.F.K. Fisher

A new pop-up restaurant opened in Amsterdam last Thursday, and it has both the food and design worlds buzzing. Eenmaal, which seems to combine a dining experience with a cultural experiment, is a restaurant that is filled with only tables for one.

The gallery-like space is modest and modern. Square black tables are staggered about the room, each with a single chair at one end. If it weren’t for tasteful flower arrangements and place settings, the place might look like a lab. Designer and conceptual artist Marina van Goor created the pop-up with a very specific purpose: to begin a discussion on the social taboo of doing things (dining, going to the movies, going to the theater) solo.

Unsurprisingly, the temporary dining experience at Eenmaal is already making a splash. Even in an Old World city like Amsterdam, where dining solo seems at odds with the social norm, the fast pace of city life paired with a true appreciation for a chef’s talents is resonating with the public. And the worldwide discussion has already commenced.

The whole thing reminds us of M.F.K. Fisher, who wrote an entire essay on the joys and importance of dining alone.

“It took me several years of such periods of being alone to learn how to care for myself, at least at table. I came to believe that since nobody else dared feed me as I wished to be fed, I must do it myself, and with as much aplomb as I could muster. Enough of hit-and-miss suppers of tinned soup and boxed biscuits and an occasional egg just because I had failed once more to rate an invitation!” ― M.F.K. Fisher

The Rise of Solo Dining [First We Feast]