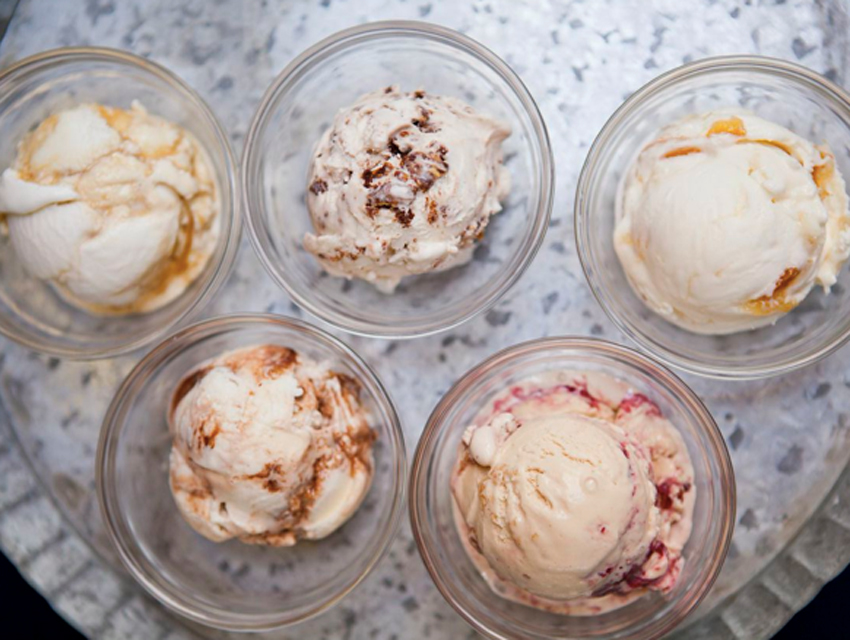 Just in time for the hottest weekend in recent memory, the highly anticipated Portland-based Salt & Straw will open its first SoCal shop on Larchmont. Its part of a new wave of artisanal, small batch ice cream shops that includes McConnell’s at Grand Central Market and Big Gay Ice Cream, which is set to open downtown later this year. Salt & Straw’s head Ice Cream Maker Tyler Malek says the new shop will feature 17 flavors, 12 of which are brand new creations inspired by local ingredients and partnerships. “I’m so excited about opening the shop,” says Malek. “It’s one thing to be serving ice cream at pop-up events. But it doesn’t give you the chance to slow down and share the process behind the product with others.”

With that in mind, here’s a rundown of five new flavors that have Malek raring to go:

2. California Peaches with Lemon Crumble
Inspired by a family recipe for peach cobbler, this ice cream uses the last peaches of the season from Burkart Organic Farms in Dinuba. “I found this ingredient at a farmers market. We get peaches in Portland, but this variety was truly phenomenal. It had a different aroma, and was sweeter and juicier than most peaches I’ve come across.” Malek makes a peach jam and mixes it with lemon cake crumbs, cinnamon, a hit of Stone Barn Liquor, and vanilla ice cream.

3. GRAND POPPY Milk Sorbet
Central to this flavor is the unique poppy liqueur from Greenbar Distillery, the first micro-distillery in Los Angeles since the Prohibition era. “They make phenomenal alcohols, including a couple different gins. The poppy liqueur is an aperitif and has a really interesting, strong poppy flavor. I’d never even thought of using something like this as an ingredient.”

4. Cinnamon Apple Doughnuts
Sidecar doughnuts is a one-year-old company in Costa Mesa that will be opening their first shop in Santa Monica this winter. Malek toasts their fresh Salt & Butter doughnuts and then adds them into cinnamon and apple ice cream. “I don’t say this lightly because I’ve tried most of the doughnut places in Los Angeles, but they really are the best.”

5. Santa Ynez Valley Walnut Oil
The walnut oil in use is called La Nogalera. It reminds Malek of vanilla because of the varying notes of flavor to it. “I was able to visit an orchard called Rancho La Vina and hang out with the growers. All the walnuts are handpicked, and they can only press a tiny amount from a large basketfull. It’s a labor of love, to be sure. The ice cream is simple, just oil and cream, which gives it both a bitter and buttery quality.”

Some other flavors to look out for: Tomato Water and Ojai Olive Oil Sherbet, Avocado & Strawberry Sherbet, and Summer Sweet Corn Buttermilk.