Home Food & Drink How a Cake Became an L.A. Institution 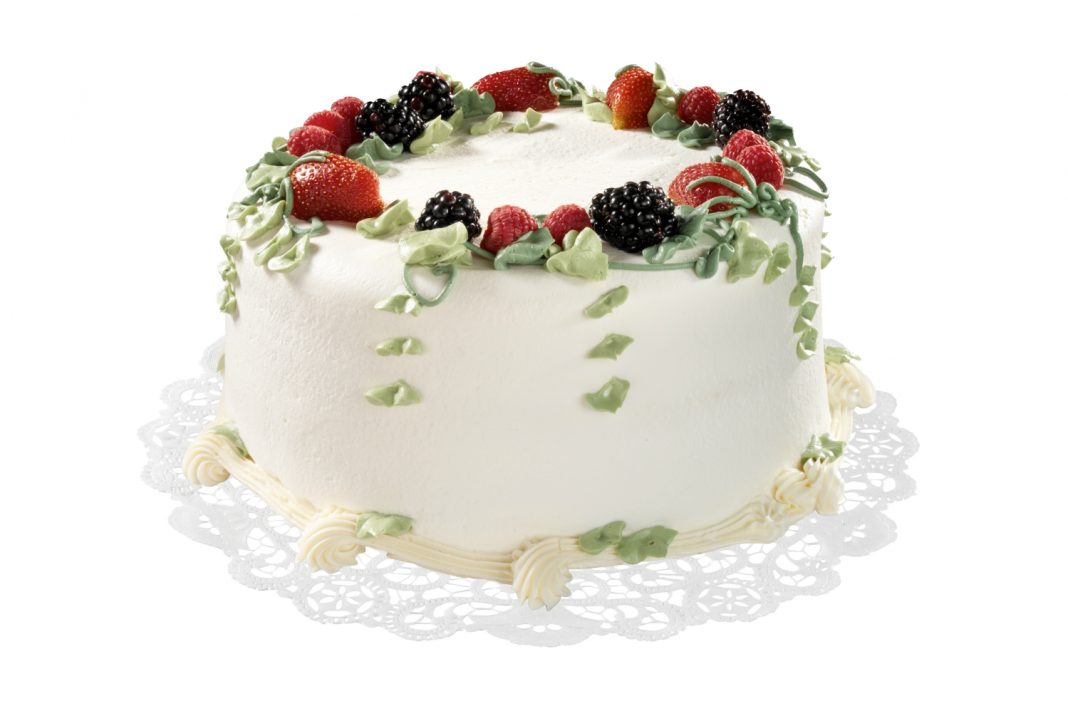 I’ve lived in Los Angeles long enough to have witnessed the scene unfold many times over. The big pale yellow box with the white-and-green band down the middle makes its first appearance. Party guests might emit gentle “oohs” and mimic dainty hand claps in anticipation. After half an hour, when the contents of the box have softened, it’s time to serve the Triple Berry Cake from Sweet Lady Jane.

For three decades and counting, Jane Lockhart’s bakery has subverted clichés about Angelenos’ dessert aversion and her Triple Berry Cake has quietly become a classic. Lockhart opened her bakery on Melrose in Beverly Grove on May 5, 1988, after building a reputation for the homemade cakes she’d sell to a handful of wholesale clients. In 30 years, little has changed at Sweet Lady Jane. The illuminated stained-glass ceiling panels, wood bistro chairs, earthy color, and always-packed cases are still intact (although now you’ll find La Colombe coffees on tap). The business has grown to include Santa Monica and Encino outposts, and Lockhart recently took over the lease on the space next door to the bakery’s first home.

Bronx-born and Long Island-raised, Lockhart was mostly self-taught when she decided to go into business with her husband, Donald. She set out to operate a bakery dedicated to decadent cakes and pastries that would have an elegant yet homemade feel during a time when commercially produced food was more the norm, even in higher-end bakeries. It was an American bakery at heart, free of French or Italian affectations. Lockhart’s New York cheesecake in particular quickly amassed a following, and was praised by Los Angeles Herald Examiner food critic Merrill Schindler as “the best cheesecake west of the Carnegie Deli” in the first review Lockhart received in 1989.

Sweet Lady Jane is sort of an ironic name for Lockhart’s bakery. “I never liked sweet things when I was a kid, believe it or not,” Lockhart explains. At her bakery, she was determined to “not use excessive sugar,” instead crafting cakes in a manner that would showcase their key ingredients. The Triple Berry Cake was an ideal vehicle for expressing that philosophy.

The iconic confection is simple. Lockhart’s initial inspiration was strawberry shortcake, which she adapted into a whipped-cream-coated, layered vanilla cake with fresh berries. Back before globalized imports made accessing produce a cinch, there were winters when she wasn’t able to produce a cake with three berry varieties; that’s no longer an issue. Lockhart developed a vanilla cake foundation to adapt to other filings, such as lemon curd and coconut. “Even with the base yellow cake, every cake tastes different, because you’re picking up all the other flavors that are layered on there,” she says.

Because “you eat with your eyes,” Lockhart and a cake decorator came up with the vine scroll rendered in sage-green-colored buttercream (all the custom buttercream colors are mixed in house), which eventually became a Sweet Lady Jane signature applied to other cakes. Then, Lockhart says, “we placed the berries on top to indicate what’s inside.” And she never skimped on the fruit.

The Triple Berry Cake wasn’t on Sweet Lady Jane’s opening menu, which included carrot cake and the aforementioned cheesecake. Within a couple months, however, it appeared in the case and started selling fast.

Event planner Steven Petrarca can attest to the Triple Berry Cake’s ongoing appeal in his industry. His clients still request the confection, including for weddings. (The wedding version features buttercream instead of whipped cream for added strength.)

“I think it’s one of those classics of Los Angeles, like the Ivy meatloaf that people loved when it first appeared on the scene,” Petrarca says. “It’s going to endure both because it’s tasty and for the nostalgia, like Spago salmon pizza. It was born when L.A. food was really starting to happen, and that place was the bakery.”

Lockhart’s own theory involves a degree of harmless self-deception. “It’s so light they don’t feel they’re eating calories,” she says of the cake’s fans. Also, she says the cake’s versatility means it “can close any dinner.” She roughly estimates the Triple Berry Cake, in its various shapes and sizes and custom orders makes up over 50 percent of her business’s total cake revenue.

“We used to joke we could change the name of Sweet Lady Jane to ‘the Berry Cake Place’ and only make that—and we’d do well.”

RELATED: The 100 Most Iconic Dishes in Los Angeles