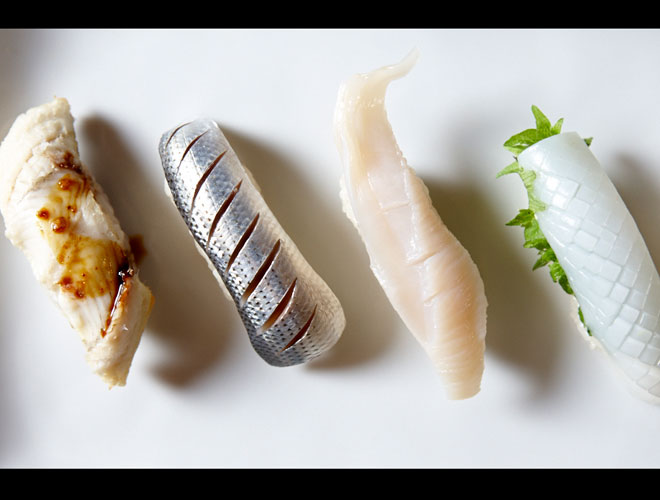 Aburi
A style of searing fish and serving it warm.

Akami
“Red meat.” Fish used in sashimi and sushi that is dark in color; examples are tuna and bonito.

Battera
A type of oshi zushi in which the fish is first placed in the wooden mold, then sushi rice is pressed on top.

Chirashi zushi
“Scattered sushi.” Slices of raw fish and vegetables arranged on a bed of sushi rice and served in a bowl. Also called bara zushi.

Gunkan maki
“Warship roll.” Sushi rice with a strip of nori wrapped around its base to form a vessel, which is then filled with ingredients.

Ikejime
Japanese method of swiftly paralyzing and bleeding a live fish to maintain its freshness and quality.

Maki zushi
“Wrapped sushi,” a cylindrical sushi roll.  Fish and/or vegetables with rice are rolled inside nori to form a long cylinder.

Neta (sometimes called tane)
Ingredients that are served as sashimi or sushi (refers to seafood or vegetables) toppings.

Nigiri zushi
“Hand-pressed sushi.” The traditional style of sushi with a slice of fish, meat, or vegetables atop a mound of rice.

Odori
Literally translated as “dancing,” the term refers to the eating of live seafood (often shrimp), which continues to move on your plate.

Okonomi
Ordering à la carte, or “as you like.”

Sushi
Slices of raw fish or meat with rice (shari).

Tataki
A style of searing fish, cooling it down, and serving it at room temperature. Also refers to a method of finely chopped fish mixed with condiments like ginger and scallions.

Temaki zushi
“Hand roll.” Fish and/or vegetables with rice rolled inside nori into a cone shape and eaten with the hands.

Temari zushi
“Ball sushi”; sushi in the shape of a ball.

Tsumami
Small bites that are not sushi but are prepared by the sushi chef; includes sashimi and appetizers.

Tsume/Nitsume/Nikiri
Thick, sweet, soy-based sauce made from a seafood reduction and used to brush onto sushi (usually eel and clam).