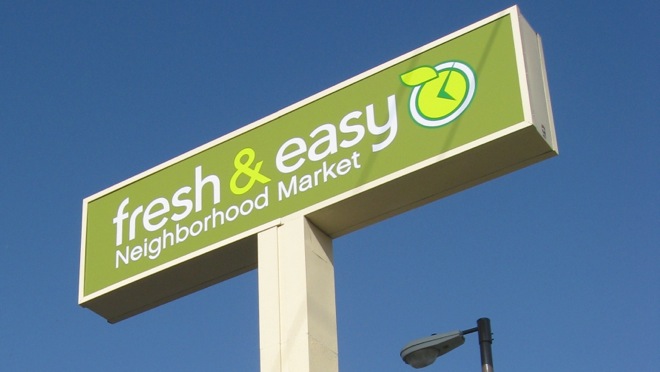 Fresh & Easy markets may be up for grabs soon or shuttered altogether according to reports that parent company Tesco (the U.K.’s largest retailer) is looking to jump ship after losing over $1.5 billion since launching the concept in 2007. So sayeth Tesco CEO Philip Clarke:

“It is now clear that Fresh & Easy will not deliver acceptable shareholder returns on an appropriate time frame in its current form. While the business has many positives, its journey to scale and acceptable returns will take too long relative to other opportunities. I have therefore decided to conduct a strategic review of Fresh & Easy, with all options under consideration.”

This announcement came with the news that Fresh & Easy CEO Tim Mason is also exiting the company after working at Tesco for 30 years. Speculations abound as to why the stores never took hold, but in my mind, Mark Lacter at LA Observed hit the nail on the head:

“Fresh & Easy’s timing was spectacularly bad, with stores opening right as the U.S. recession was taking hold. But as the Journal points out, it was more than just the downturn. The idea simply didn’t take—at least not in large enough numbers. Shoppers could never figure out what kind of store it was: Specialty, convenience or discount.

Truth be told, I only stepped foot in a Fresh & Easy once, when their South Pasadena outpost opened in the former Wild Oats space. I didn’t get it. No doubt the chain had its fans, but it sounds like I wasn’t alone in not being drawn in. It’s unclear what will happen to the ~200 stores in California, Arizona, and Nevada as of now, but a big change is certain, and perhaps that’s just what they’ll need to turn business around.