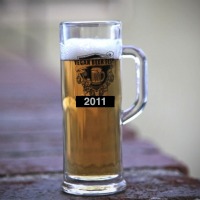 Share
Email
Facebook
Twitter
Pinterest
ReddIt
Got plans this Saturday? Do they involve local draft beer and  chef-inspired gourmet vegan food? If not, we suggest checking out the 2nd annual L.A. Vegan Beer Festival. Hosted by Tony Yanow, founder of vegan-friendly pubs Tony’s Darts Away and the soon-to-open Mohawk Bend, and vegan blogger Quarry Girl, the event pairs local suds with unlikely beer foods such as a potato-jackfruit taquitos from Seabirds, a tempeh bánh mì from Mandoline Grill, and vegan sausages from Frankenstand. In addition, breweries such as Stone, Hangar 24, Brouwerij West, Eagle Rock Brewery, Lost Abbey, Deschutes, Dogfish Head, and many more will be pouring unlimited samples of craft beer. The event will take place at rock venue the Roxy so expect live music from bands such as The Silent Comedy, The Stripminers, and Mowgli’s. Proceeds from the event will go toward Animal Rescue Media Education, meaning that animal lovers, as well as beer fiends, rockers, and hungry vegans can all find something to agree upon. Tickets are $40 and available online.