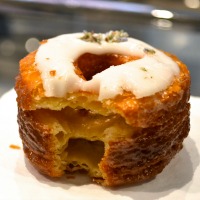 Riding on a cumulus cloud of Cronuts® from New York, pastry chef Dominique Ansel made it rain fancy pastries in L.A. and took the town by storm this weekend with his croissant-doughnut hybrid sensation. The Cronut’s Hollywood debut (during Oscars weekend no less) happened at Barney’s New York at The Grove. This past Saturday, hundreds of curious Cronut cravers braved record-breaking rainfall to queue up in a staggeringly long, amusement park-style line for a chance to taste pastry perfection. Seems like it was worth the wait: patient patrons were treated to a “Milk & Honey” Cronut® glazed with Tahitian vanilla milk ganache, filled with honey jam, and dusted with lavender sugar.

The L.A. Cronut pop-up by the numbers:

● 500: the estimated amount of Cronuts for sale.

● 2: the limit of Cronuts per person for purchase.

● $15/hour: the amount of money a person was paid to wait in line for someone.

● 12 midnight: the time L.A.’s own pastry genius Sherry Yard clocked in to help make Cronuts before the big day.

Barring the on- and off-again storm on Saturday, the Cronut’s Hollywood performance went as smoothly as doughnut glaze. A red carpet was rolled out, Hollywood-style. Amenities included shelter from the wet weather, pastry samples, free coffee, and a D.J. to keep spirits amped.

Upon paying for the prized pastries via iPad at the store entrance, each new Cronut owner—clutching Dominique Ansel Bakery’s trademark golden-yellow box—was greeted by Ansel and his toothy smile for a photo op. All proceeds from the Barney’s New York-hosted Cronut sale went to Heart of Los Angeles, an organization dedicated to underserved youth.

When I asked Ansel if an L.A. store was in the works, he played coy and grinned, “Nothing official yet.”