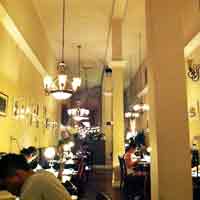 Sometimes the best discoveries are those that you stumble upon unexpectedly. Here, we bring you some of our favorite surprises—they may not be new, but they are to us.

It’s the kind of place you discover when your movie is over but you aren’t quite ready to go home.  It’s called The Honey Badger Café (my friend and I call it the HBC), and it remains unclear what came first: the infamous YouTube video (see below…) or this Alhambra gem, with free wifi, delicious sandwiches, great boba and tea drinks, and exotic ice cream. The Honey Badger is open until 1 a.m. on the weekends, making it a quintessential part of the neighborhood’s nightlife—just with boba instead of beer. The Café manages a delicate balance between its American sandwiches, quasi-European ambiance, and the ever-popular milk tea. There’s always one or two tables available, but the booths at this local late-night study spot are usually covered with textbooks, MacBooks, and empty pint-sized glasses.

We were initially drawn in by the exotic durian ice cream (my Singaporean friend hadn’t seen it offered outside of Asia), but other unique offerings include a real taro smoothie, almond milk tea, and a java chip mocha.  For lunch and dinner, it’s tough to choose between the sandwiches. My friend refuses to order anything but the Chicken Pesto, but I swear by the Cuban Pork.

The long narrow cafe echoes with the sounds of murmured conversation and the comforting clack of fingers on keys. The Honey Badger Café fills a neighborhood need, and reminds us of life’s simple pleasures: a cold drink, a good sandwich, and a friend.

And just because we really can’t get enough of this video, here ya go: